Take advantage of the capitol and the senate for your photo session!

Engagement Session At The State Capitol In Saint Paul Mn

The Minnesota State Capitol is a landmark building loved by advertising photographers in Minneapolis and the Twin Cities who want to include a touch of Italy in their pictures. Indeed, the building is inspired by a famous European piece of art in Rome.

For Emily and Dustin’s photo session in Saint Paul, we first went to a natural and historic park, which was designed to preserve the local heritage, located under the interstate. For the second part, they chose another historic building! 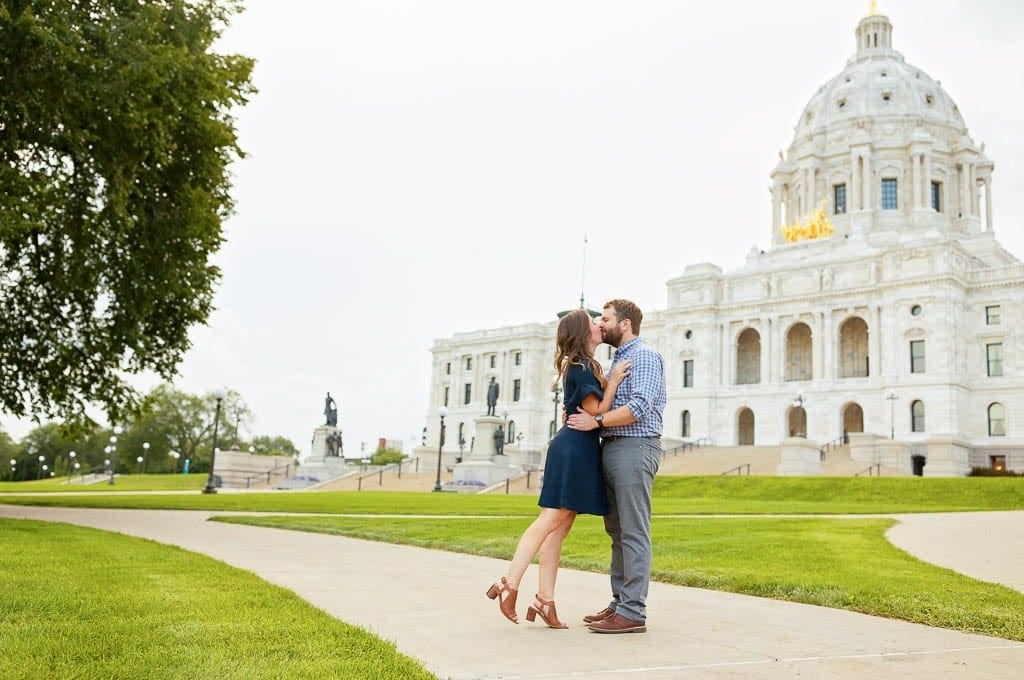 Couple Kissing in front of the Minnesota

Minnesota State Capitol: and Historic and urban style for your photo session in Saint Paul

While the first location was in nature (at the Bruce Vento Nature Center), the second location was in the city. It’s a good idea to mix nature and monuments for a more modern appeal. We will see at the end of this article 3 other complementary location you can choose.
After we easily parked on Cedar Street and were walking up to the building entrance, I had a curious feeling: to feel at home, in Europe! 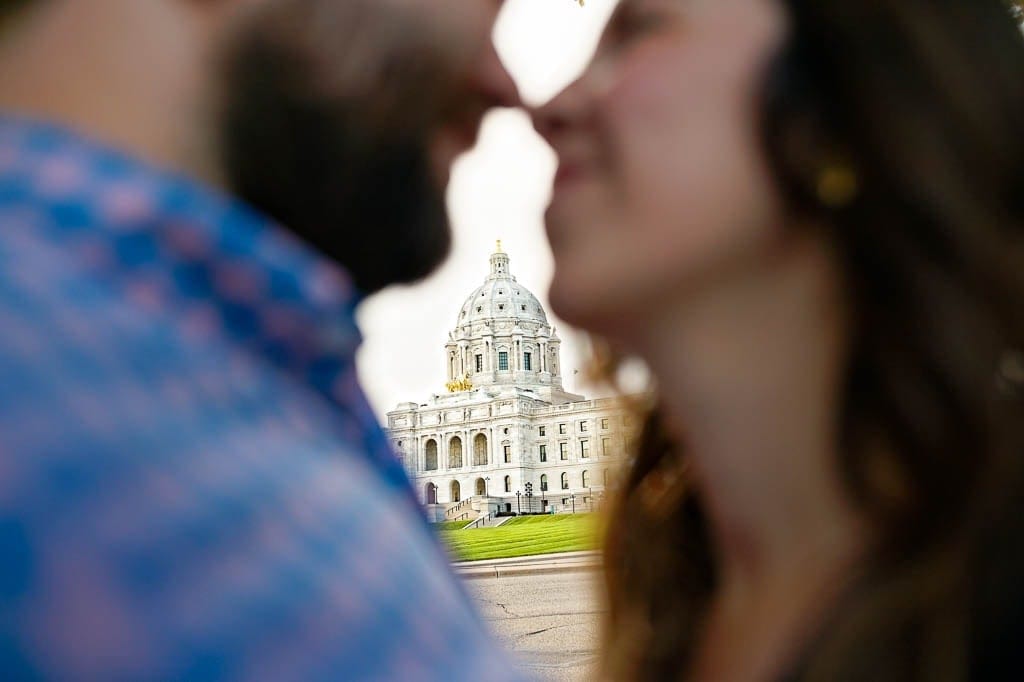 Minnesota Landmark Building After its renovation

The Capitol, A European touch in St. Paul

If you grow up in the 10,000 Lakes States, you will probably take a guided tour and you will know the architect: Cass Gilbert. But did you know he found his inspiration in the Saint Peter’s Basilica in Rome? That’s why this marble piece of artwork with its staircase and column and the dome looks so beautiful to me. Cass Gilbert, want the interior of the rotunda to be especially amazing, to inspire politics.

But one big difference stroked me that day regarding such a building: there was nobody, no visitors! We were alone and enjoyed this amazing place to take photos without being interrupted by tourism. In France it would have been impossible! 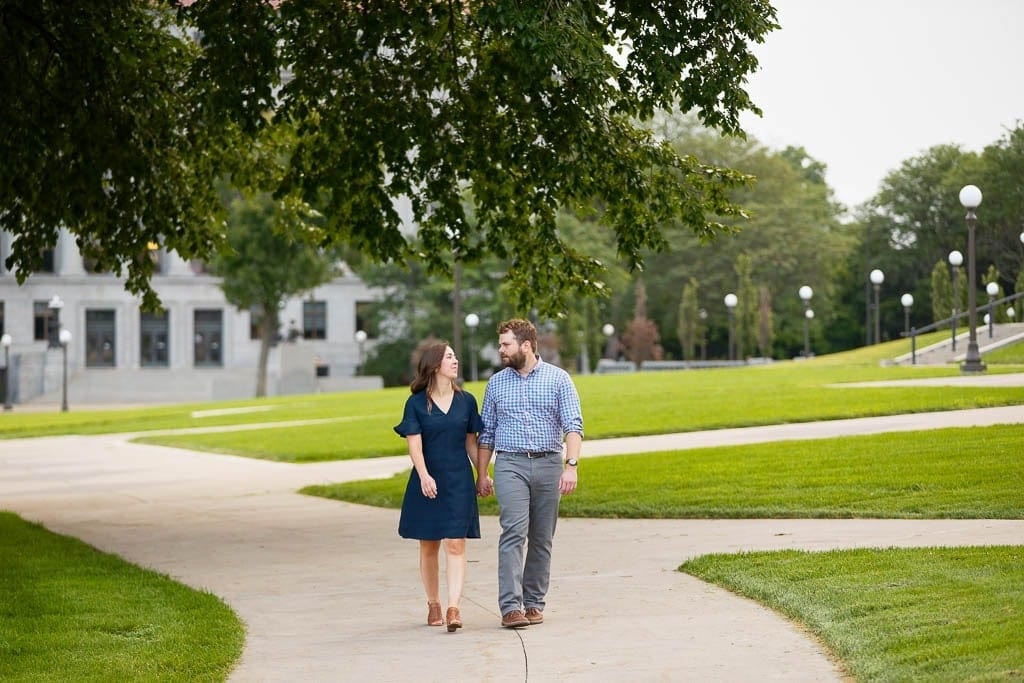 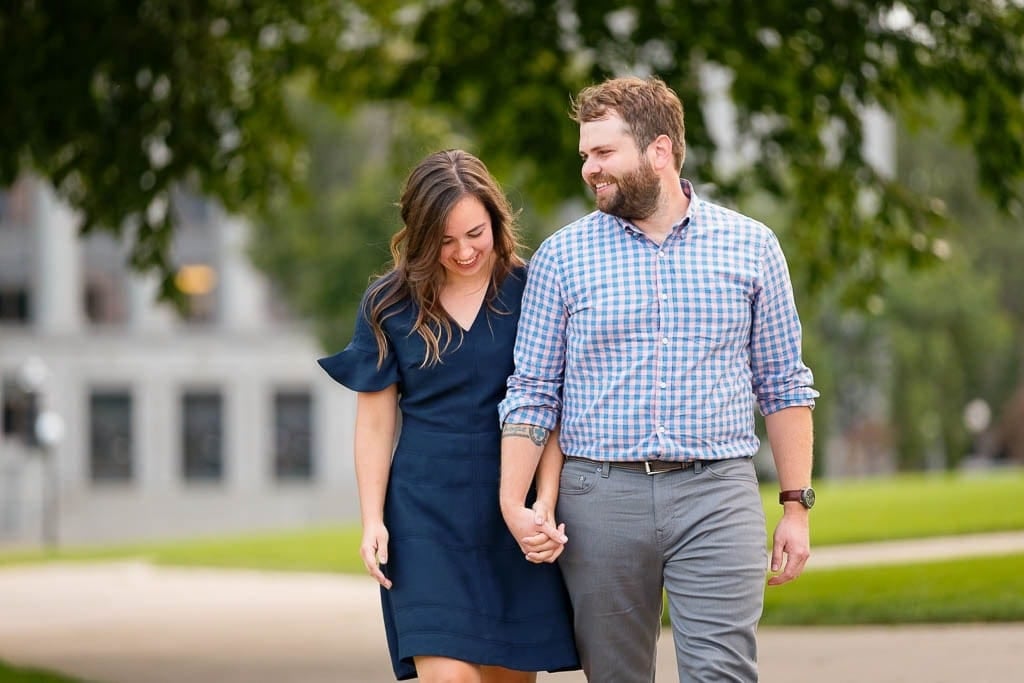 Partners laughing in front of the legislators house 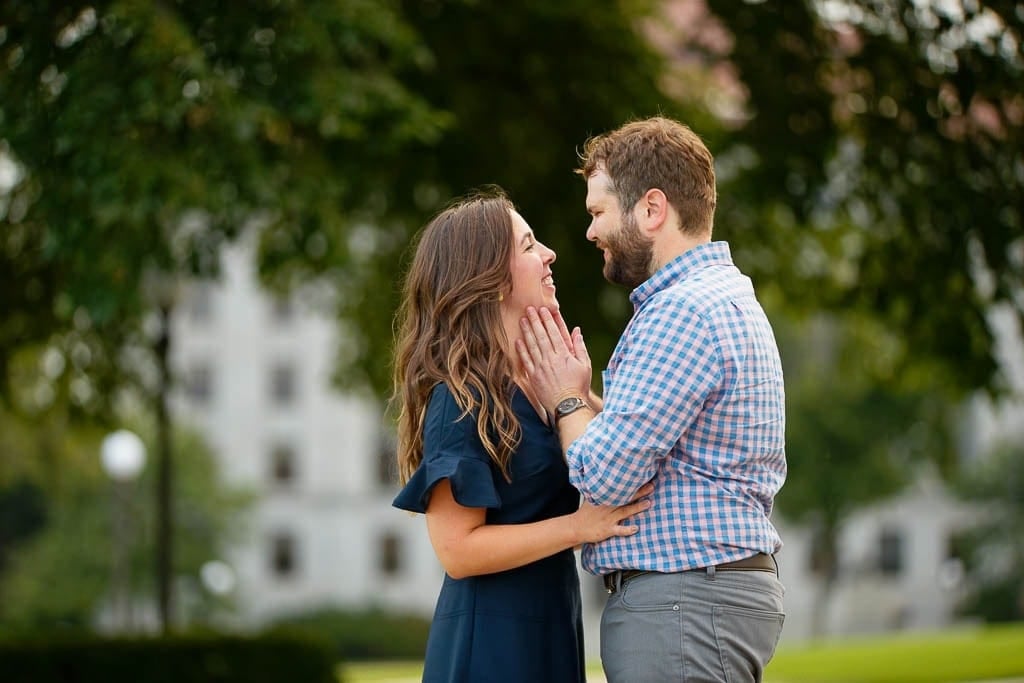 Let’s use the architecture!

This architecture style comes from the Italian renaissance when artists were copying great antique monuments. Through the time the design evolved by including more bronze, golden leaves and granite statues. But from the beginning, the unique goal of the architect is to give people the feeling of being small in front of the building.
Here, the architecture makes the Minnesotans and the employees (legislator, lawmakers) feel small and humble in front of the Senate, the Supreme Court and the Attorney General.

The golden statue standing on the top of the building (the Guadriga), remind me of King’s castle, such as Versailles Castle. Now should we consider that the lawmakers assisting meetings in this building are like a king and queen above the people they serve? That’s another question.

Another goal of this massive architectural construction is offering people a scenic view on Saint Paul Downtown.
Taking pictures in such a place was like the respect toward the building was transferred to the love linking these two lovebirds. It creates timeless environment for timeless pictures. 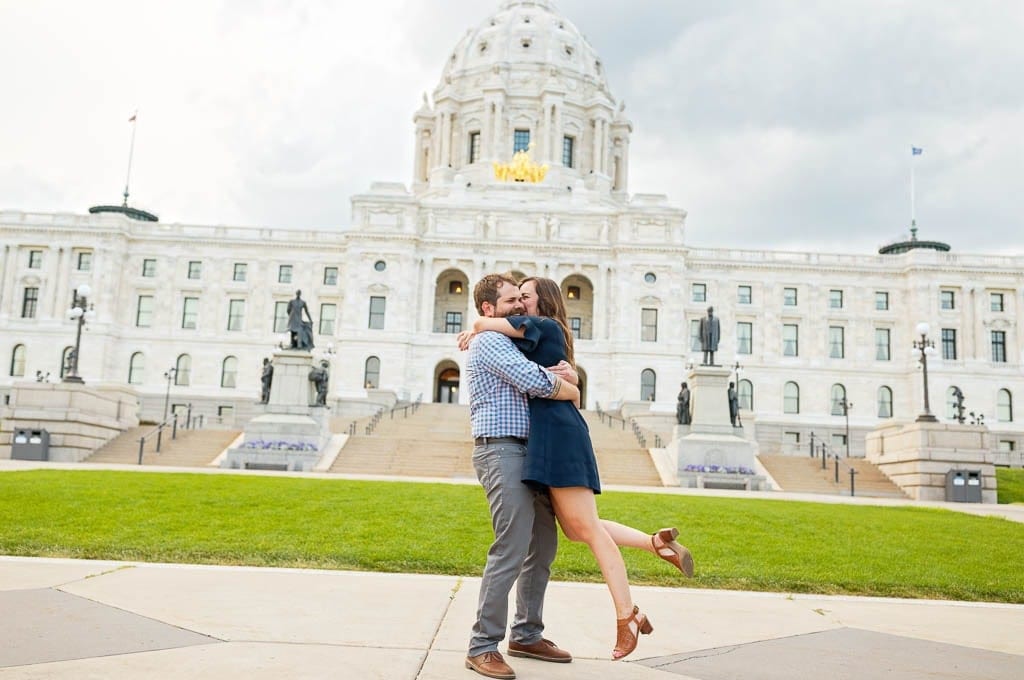 Did you know that, despite the quadriga, the architecture is directly inspired from a Basilica in Rome? 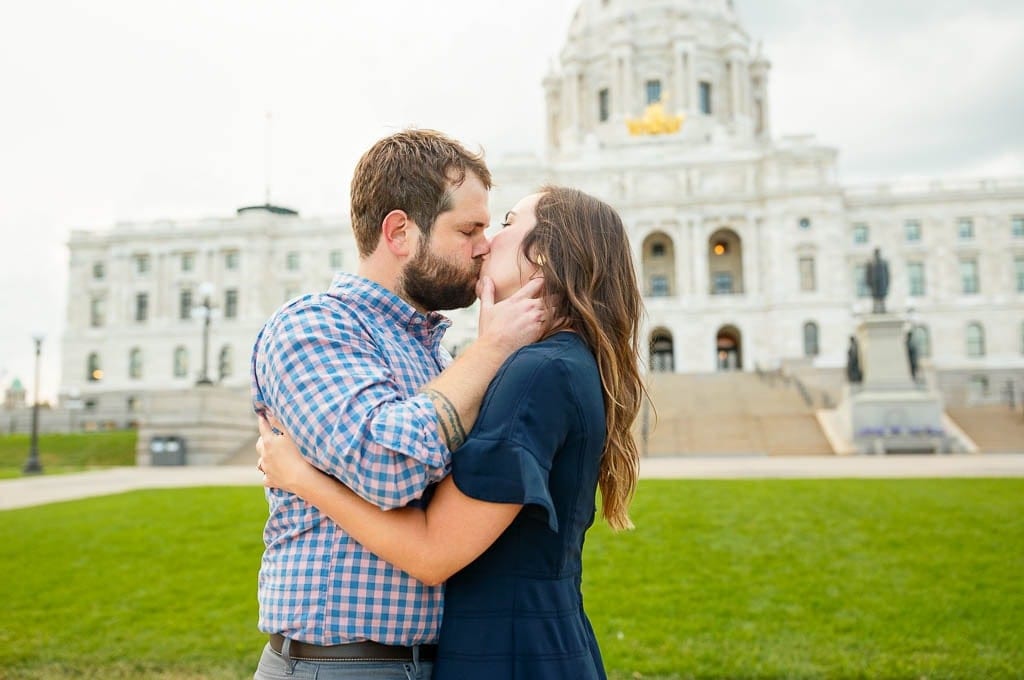 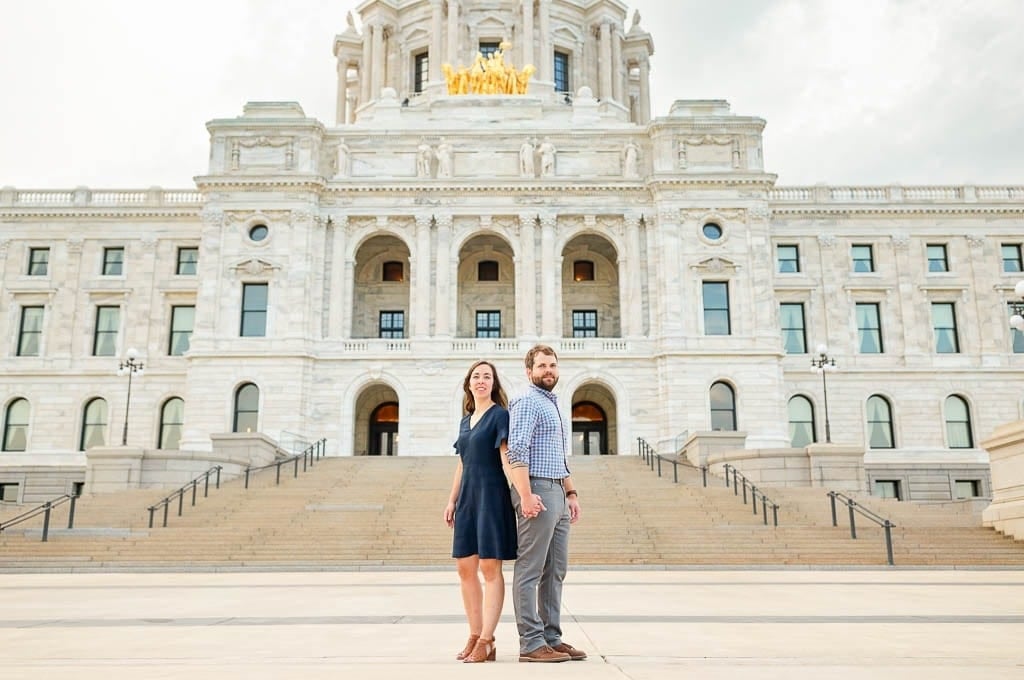 I like to use the perspective, and I also like marble. It’s almost a light gray photo studio background where the lovers’ bodies can contrast. Also, I enjoyed playing with the stairs and columns of the Minnesota state Capitol building.

Accessible to People With Disabilities

Minnesotans in wheelchairs would be happy to know that the capitol is all equipped to welcome them! In consequence it’s a great place to take pictures. 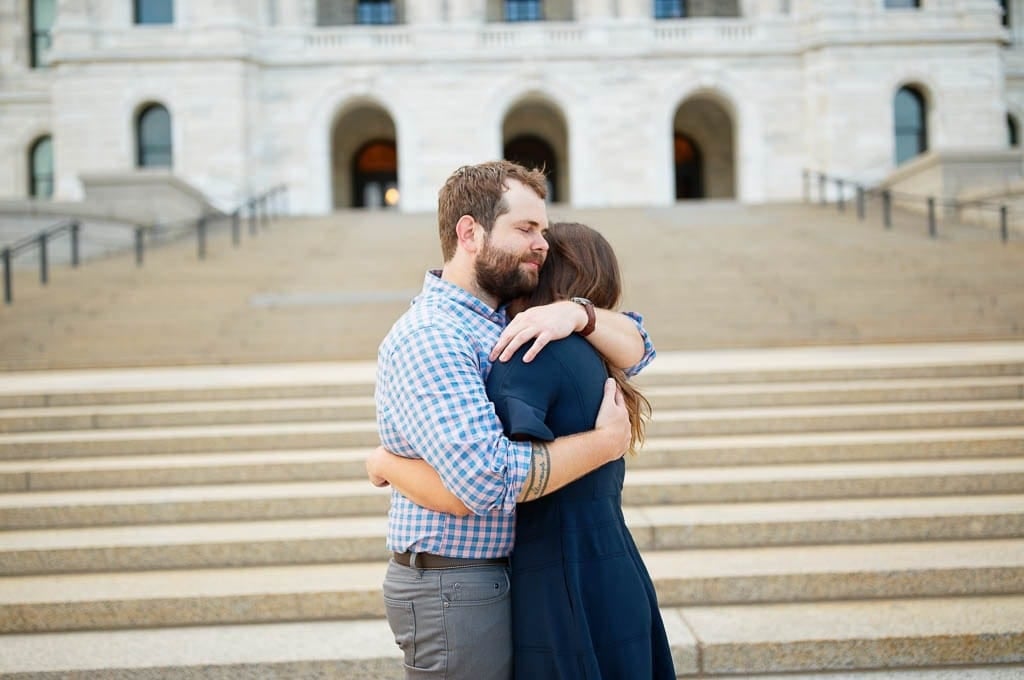 Hugging in front of the house representatives 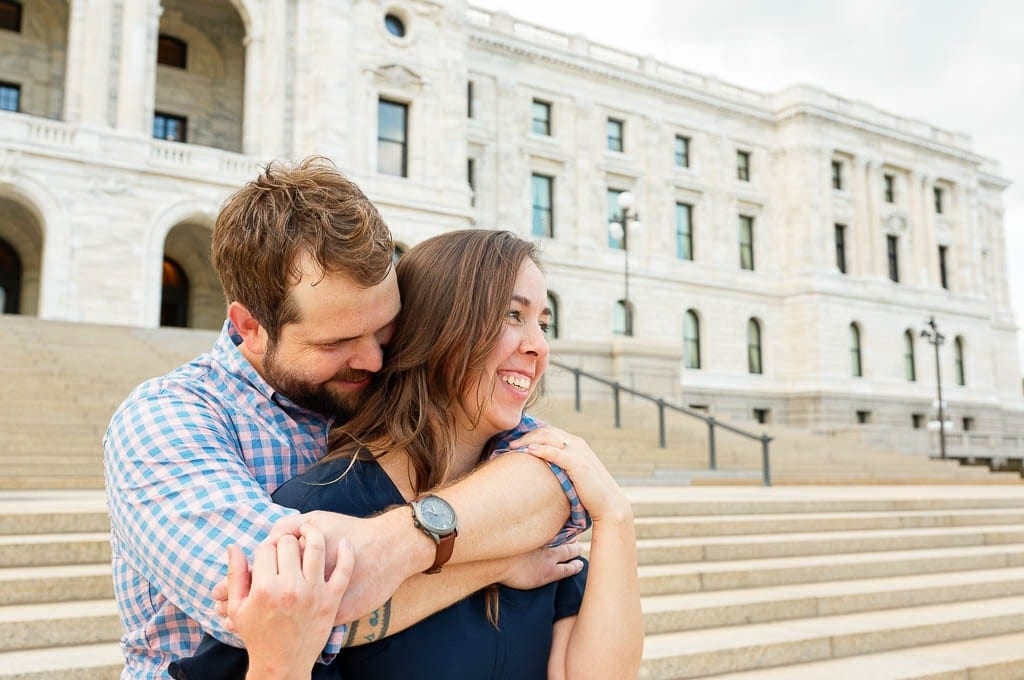 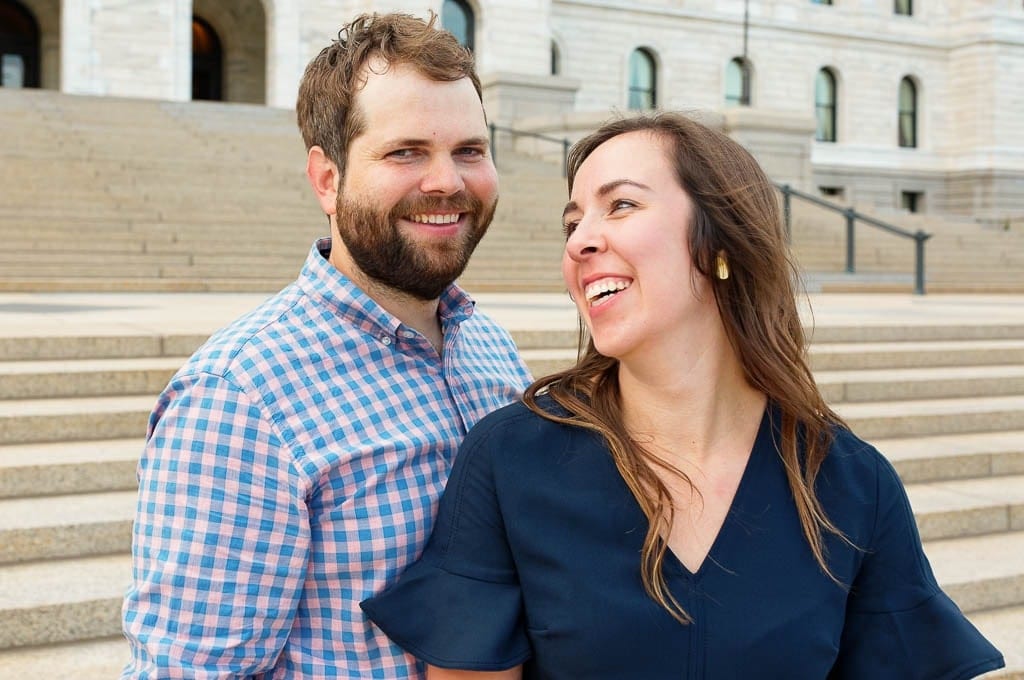 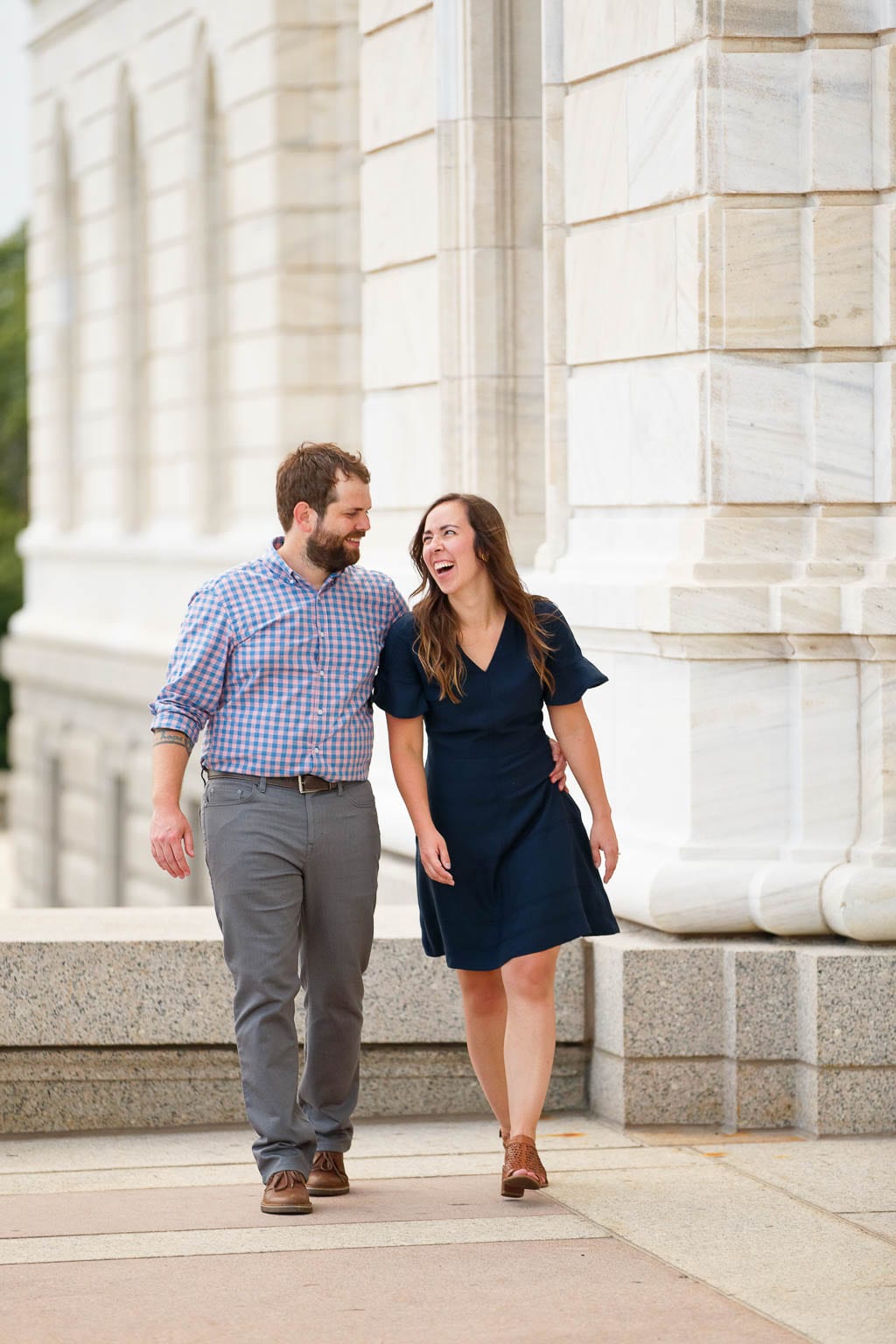 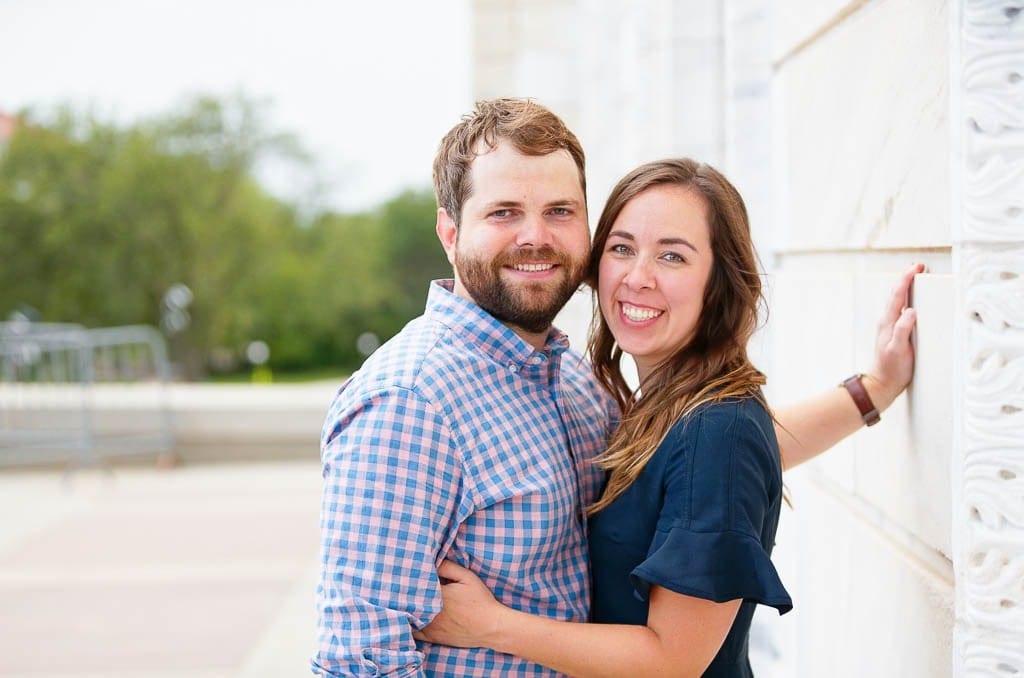 Take Some Pictures Inside

When we arrived, the building was unfortunately already closed (so we didn’t take any picture with the rotunda). But it is worth coming again and take some pictures inside for the engagement session. Indeed it is easily accessible and they don’t require a permit. But, most of all, the interior is pretty amazing. 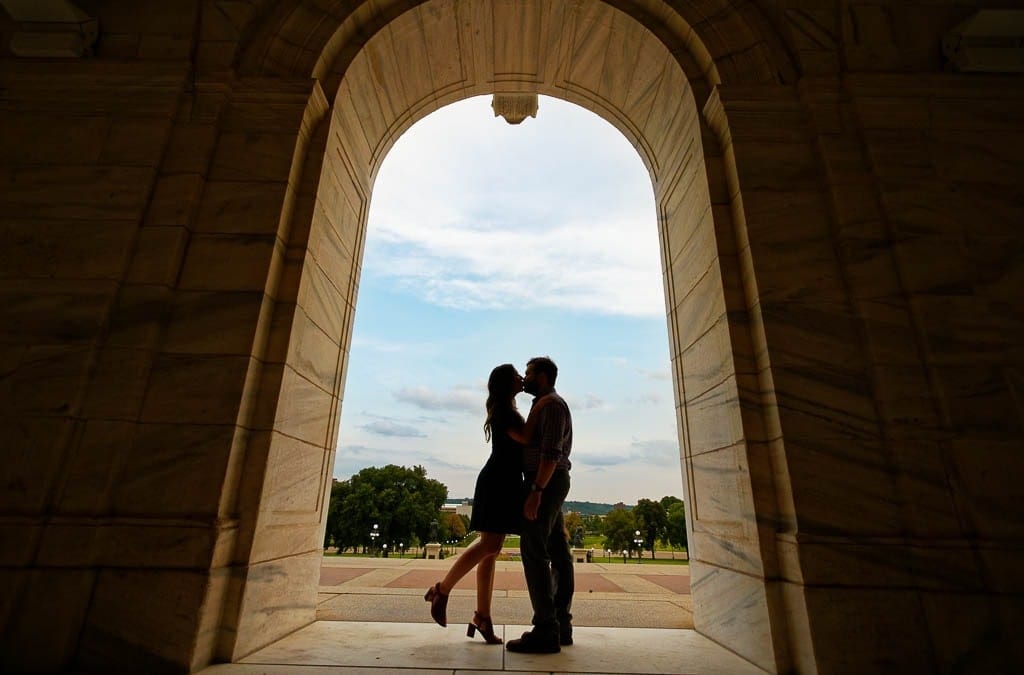 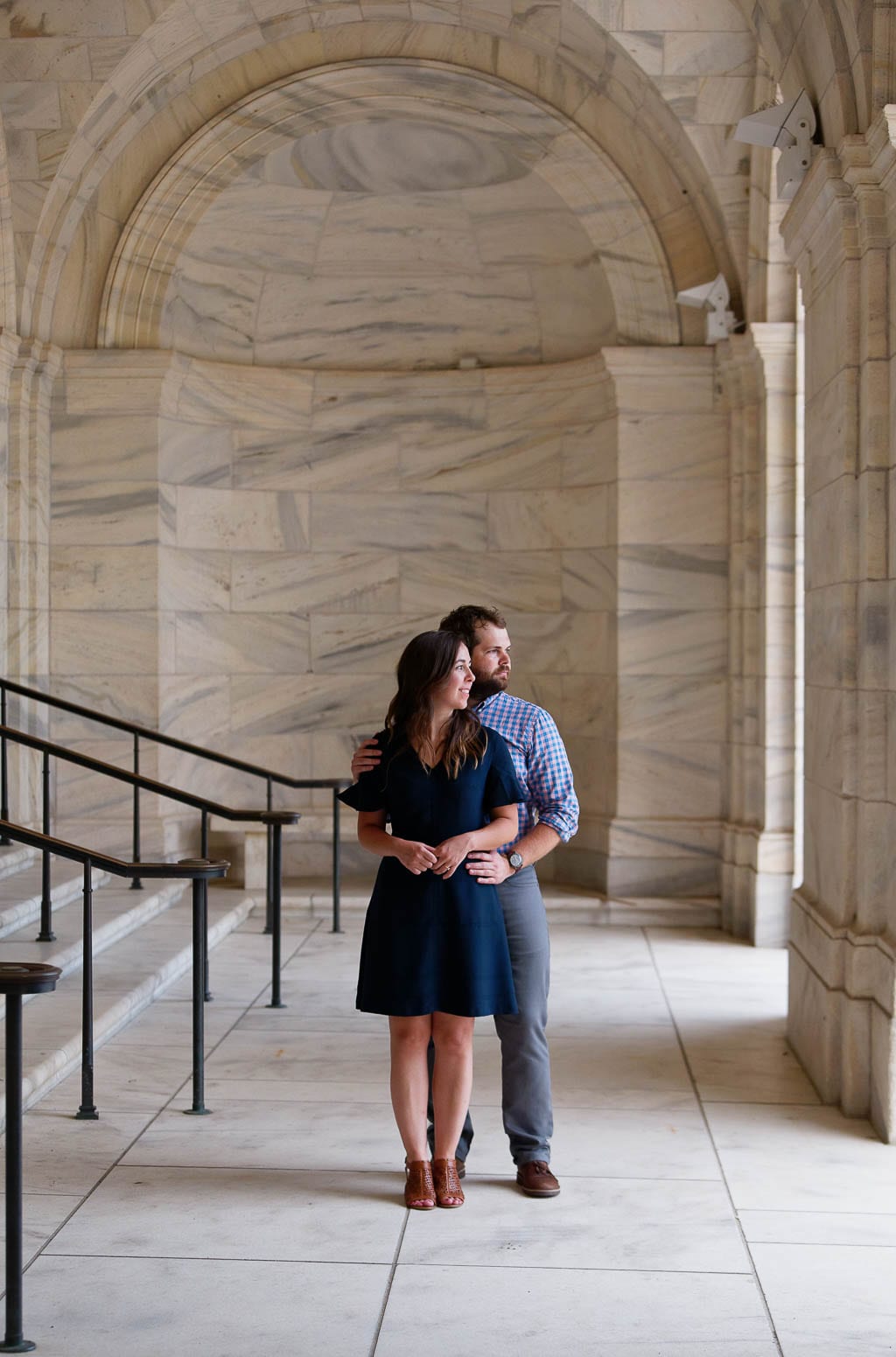 Check at the good work done with the stone restoration 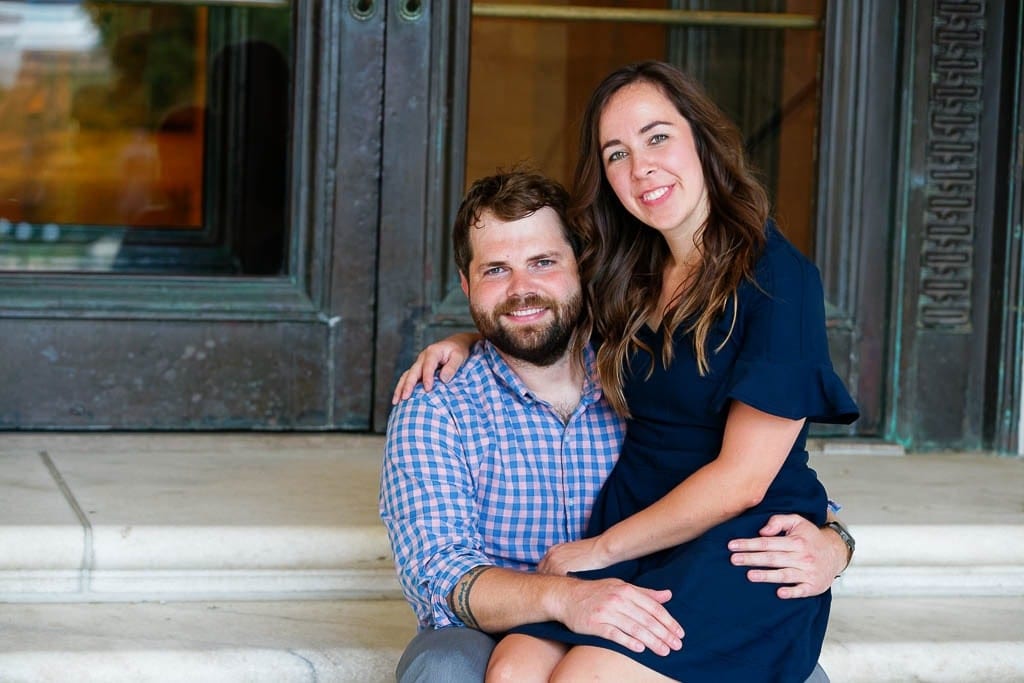 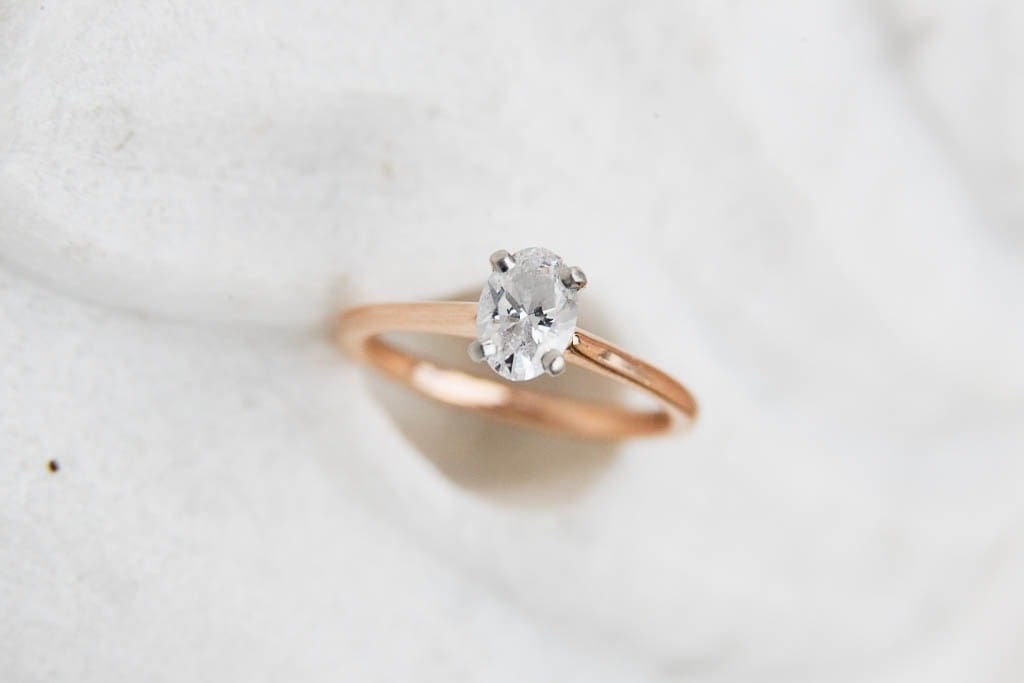 Ending the photo session at the James. J. Hill House

Then we decided to head up to another historic building on Summit Avenue, just after the cathedral, the James. J. Hill House, a big mansion. We enjoyed this great edifice.
It was funny to see the contrast between the dark Rugged Stone of James. J. Hill House and the white marble, especially because these two landmarks historic monuments have been constructed more or less at the same time. I mean, they could have used the local underground limestone for the construction.

Finally, we took pictures until the last sun ray. The bride and groom-to-be were exhausted! I hope that they had a lot of fun. I was pretty excited to cover their wedding in Saint Paul, downtown a couple of months later at another renovated historic building, the Saint Paul Athletic Club. 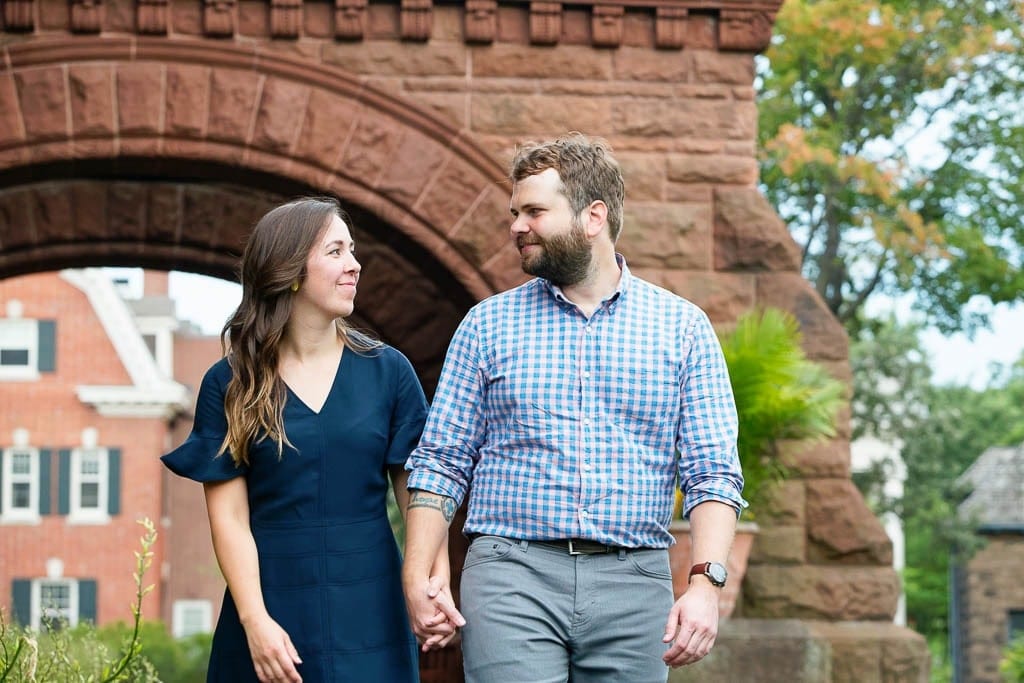 let’s use this ramp made for person with disabilities 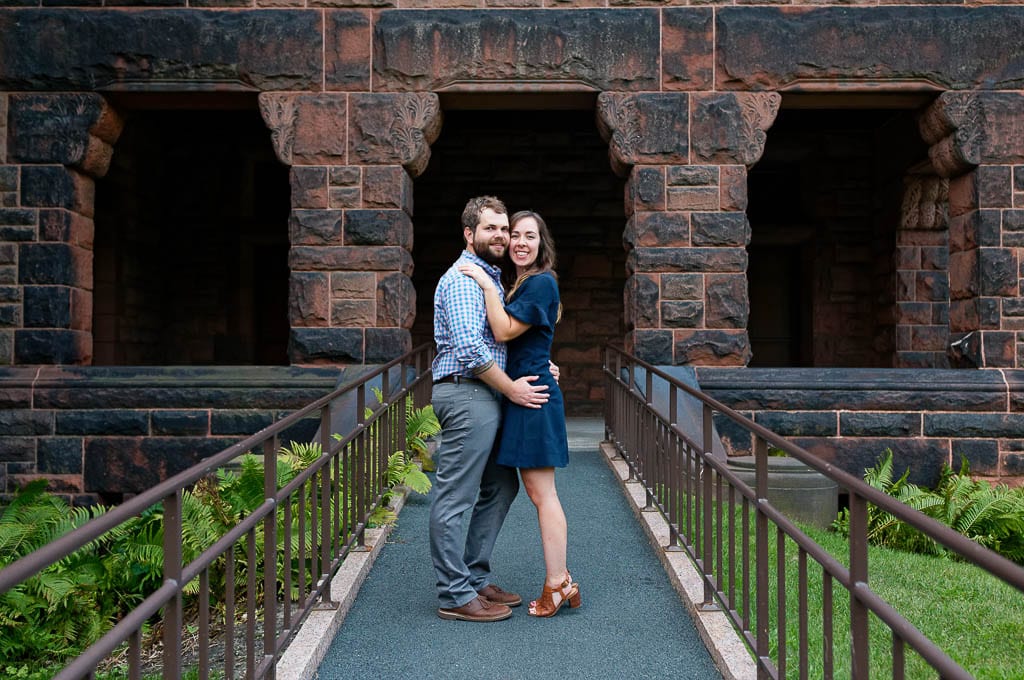 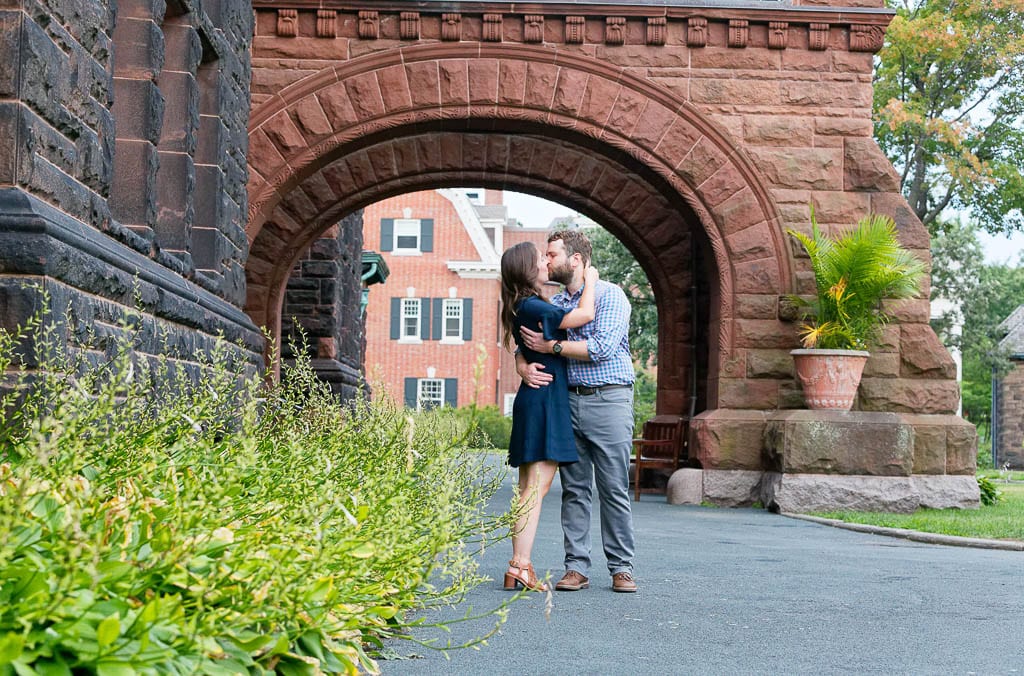 The more variety of background you use for your pictures, the more different type of result you would have. It’s usually great to mix modern and historical, buildings and nature, conventional and subversive. It’s also the opportunity to wear more than one outfit.

Another Minnesota landmark building located in the south of Minneapolis, the Swedish Institute and the Twin Cities pride is the Swedish Institute. The aristocratic building remains us the glorious age of the Industrial Revolution when the upper-class aristocrat families organized luxury diner. Let’s think of Gatsby the Great for instance.

Minnesota has several gentlemen’s club, such as The University Club of Saint Paul. Those historic places are usually detracted with luxurious furniture, well designed. In consequence they present signs of distinction cherished by our ancestor. You can easily imagine, in the ’50s, the next governor seating in a comfortable expensive leather coach, with a class of whisky in the hand and discussing with intellectuals of the university of the future of the economy.

Minnesota, and especially Minneapolis and St. Paul MN, has some futuristic building such as The Dome at Millennium Hotel. Modern skyscrapers, glass buildings contrast with the impressive building from the past. Of course the interior of modern building are not always perfect. Nice hotel lobby works great, but avoid simple room for meetings.
Also, quite similar to the Dome, a simple rooftop, surrounded by other buildings and offering a view on the city skyline could also be a great option to consider for your engagement session.