Elegant, Chic & Emotional wedding in a post-industrial venue near Minneapolis

After their engagement photos with, it was now time for their friendly photographers to capture their ceremony. I warn you, it’s one of the most terrific weddings I have ever covered!

I first met the newly engaged couple, Lindsey and Jordan in Minneapolis during the winter and I was immediately seduced by their project to get married in the birth place of the bride, Stillwater, MN. For that reason they chose to host their wedding Reception at the Loft at Studio J, located in the Historic Downtown Stillwater. It’s a large event center!
After their gorgeous photo session in Saint Paul, they were about to tie the knot!

If you haven’t yet seen it yet and before looking at their ceremony pictures, check their engagement photos with their Minneapolis Photographer. Have a look at the crazy part of St Paul’s roof top, a romantic part of the Kellogg BD, and the first part of the Rapsberry Island. 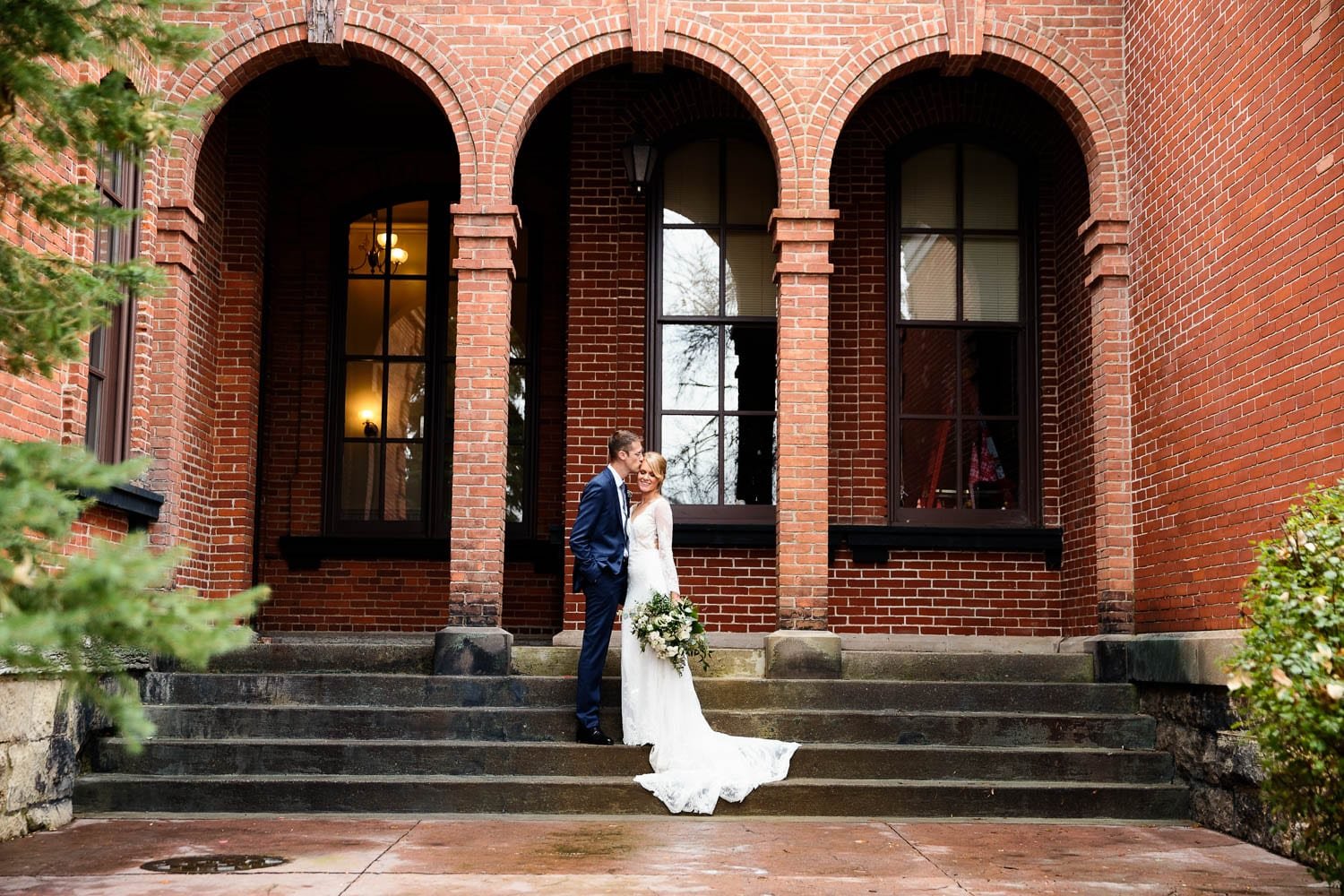 For her big day, the forecast was not very promising and the temperature pretty low, which I noticed while I was driving from Rochester, to Stillwater, Minnesota.

Lindsey decided to get ready surrounded by her relatives and bridesmaid in her parents’ house. When I arrived, she had her hair and makeup being processed. The result was simple and sophisticated at the same time. So, while she was seated, I took detail pictures of her wedding gown, her shoes, jewels and rings. I was not surprised she chose such an elegant open back dress. Lindsey, as confirmed by the choice of her photographer, is a person of upscale taste (joke).

When ready, she was not only beautiful; she was transformed into a majestic and stately princess. She has something rare, an unparalleled natural grace: she has this little shinning thing in the eyes that (only) smart people have. In addition she has the sweetest and kindest of the mothers (I mean, the representation of St Mary in paintings). And finally her big smile offers to others the joy of life (OK, I stole this sentence from her sister’s speech, but it’s true). What a dream for a wedding photographer capturing such a stunning bride!

The Groom Getting Ready in a Loft Downtown

It’s on Mainstreet that the groom got ready in a penthouse with scenic views on the river. Inside the loft, the guys were relaxed and enjoying the brunch while remembering some memories from school.
Jordan asked his brother to help him fix his suit. Those two were making jokes all the time, which allowed me to capture lovely moments. The ambiance was pretty cool and I tried to create unforgettable pictures, using natural and artificial lights. Moreover, Jordan is smart and good-looking, a perfect groom with charm, making it easy for me to photograph.

The bride and groom had their first look in the backyard of the Parents House, with the woods as a backdrop. The groom was amazed and speechless. Then, they opened their letters and she made fun of him because she finished reading before him. What a joyful show for all the witnesses that we were.
Then, we took the Trolley with all the bridal party to downtown in order to take the couple and bridal party pictures. In my opinion, renting a trolley was a better idea than a limo or a modern shuttle service.

We first stopped at the wedding venue, the loft at Studio J, in order to enjoy the natural light coming from the windows. I played with the crystal chandelier, the backlight and the memorable antic picturesque Coca-Cola wall.

You got it, the session was a bit faster. It’s not the recommendation I give in my pre-wedding planning checklist. But it turned out well! The reason is that we previously did the pre-wedding session on Saint Paul. During the current session, the bride and groom felt at ease, knowing what to do and we used every precious second to capture their love.
During the planning process, we considered going to the St Croix Boom Site, but given the weather we adjusted and decided to skip that part.

After the Loft at Studio J, we went to the waterfront, adjacent to the Lift Bridge, to take pictures on the river. I integrated the marina and the steamboats in the pictures and you can see the Wisconsin’s shore on the back. I also used the trolley to take bridesmaids and groomsmen pictures. Then we enjoyed the historic Washington County Courthouse for some bridal party pictures on the staircase and some pictures in the courtyard.
Finally, we moved to a luxury house to celebrate this special day with the close family members. We also took some family portraits.

Ceremony at the Ascension Episcopal Church

The religious part of the wedding was held at the red brick Ascension Episcopal Church, adjacent to the Stillwater Library. By the way I covered a small wedding on its roof top a couple of months earlier.
So, the bride walked down the aisle with a lot of emotion. My priority was to catch it in an unobtrusive and documentary way.
The lightning conditions inside the church was quite awful (and no flash allowed by the officiant, what could potentially be a source of problems). Nevertheless I managed to push my equipment to the maximum of its capacity and handle this low light environment. Sometimes, church rules are a real disappointment!

As a photojournalist and having covered a lot of celebrations, this one was a memorable one! As a matter of fact, Lindsey continuously looked at Jordan with passion. Sometime the officiant and the stress put a distance in the couple. But here it was the opposite: a real connection between those two lovers. It created some timeless and romantic photographs that I hope they will cherish when looking at their wedding album.
And then they exchanged vows and she said “I do” and became husband and wife!
When they stepped out of the church, guests threw confetti on the newly married couple.

Escape with your wedding photographer during the cocktail hour

While guests slowly arrived one by one at the reception, the bridal party headed up to Stillwater historic downtown to have a drink. While we walked down Myrtle Street, we used fountains to shoot some posed portrait. Also, when we turned in Mainstreet, I did more candid and photojournalistic shots, with all the bookstores and antique shops in the background. We stopped at the Feller coffee for a glass of wine. It’s where I used the fireplace to catch those breathtaking and spectacular pics. After the Cocktail Hour, we all headed up to the reception area to celebrate their unique wedding reception.

Among the plenty of chic wedding venues that offers Stillwater, Lindsey and Jordan decided on the loft to celebrate their wedding day.
It’s a renovated historical building with bright wood floor and vintage red brick, adorned with trendy decoration elements everywhere (modern and post industrial) that provide the venue with a funny personality. The dinner was good and the memorable speech, with an exceptional traditional sister’s dance! To produce such images, I had to work with off-camera flash.

Then I take advantage of the location assets, staging artistic pictures with the chandelier and the bar’s glasses (thanks to the help of the bartenders).

Then the bride and groom opened the dance floor with their first dance, fallowed by the father-daughter and mother-son dance. I especially like the emotion from the picture of the father holding his daughter. Soon after all the guests join them to dance under the variety of songs coming from the DJ speakers.
Before leaving them for their nuptial night, I took them a last picture of them using the wood staircase.

I can’t thank enough Lindsey and Jordan to choose me and trust me to document their wedding day. From the planning process to the last picture, it was more than a real pleasure to work with them.

VENUE AND CATERERS The Loft at Studio J

Ready to drive? 4 Alternative Photo locations you would find only in the Twin Cities

Stillwater features a bunch of location that would work perfectly for your wedding’s portraits: the courthouse and the post-industrial red brick buildings. Though, if you are still not satisfied, find here a short list of other photogenic spots.

I can’t repeat it enough. Empty Rooftop parking  are nothing but amazing.

Tons of Options at Centennial Lakes

The Centennial lakes (located in Edina, Minnesota), is a unique place offering a high variety of backdrop for photography. Indeed, it’s a mix of modern part including glass building, and a city park carefully designed by landscapers. You can find there a min golf (which are great in photography), some old fashion ironed and modern bridges, some pine trees, some meadows, weeping willow trees and much more. The result is a location where you can have your pictures taken all year long! In a way, it reminds me of locations such as the Trellis Outdoor Gardens and the Camrose Hill Flower Studio that concentrate dozens of scenery in a small field.

If Saint Paul and Stillwater, the place of birth of Minnesota, both offer Library Rentals, the impressive Historical James J. Hill Center Library is located downtown near a wilder variety of Historical building that you could use. Let’s think of the immediate adjacent the Landmark Center, the rice park, the St Paul Hotel for instance. But don’t forget to mention the Summit area, the Capitol and the Cathedral.

Conclusion: should you get married at the Loft by Studio J in Stillwater?

As you might have already guessed by the venue’s name, it’s a location own and managed by a photography studio. So, of course, as good vendors, they would highly try to persuade you to hire their professional cameramen…
That being said, let’s be honest, that’s a gorgeous venue. I would say that the main downside is probably the yellow electric lighting (that required to hire a good photographer) if you don’t want all your image to be yellow.

The main reasons for booking such a venue are