Emily and Darren photo session at the Centennial Lakes

Today let’s go back to a winter photo shoot which took place at the centennial lakes, in the south of Minneapolis. Many Twin Cities surprise proposals take place here during winter, and wedding on the ceremony auditorium; today it’s all about Emily and Darren’s engagement session.
You see that they both were very brave! 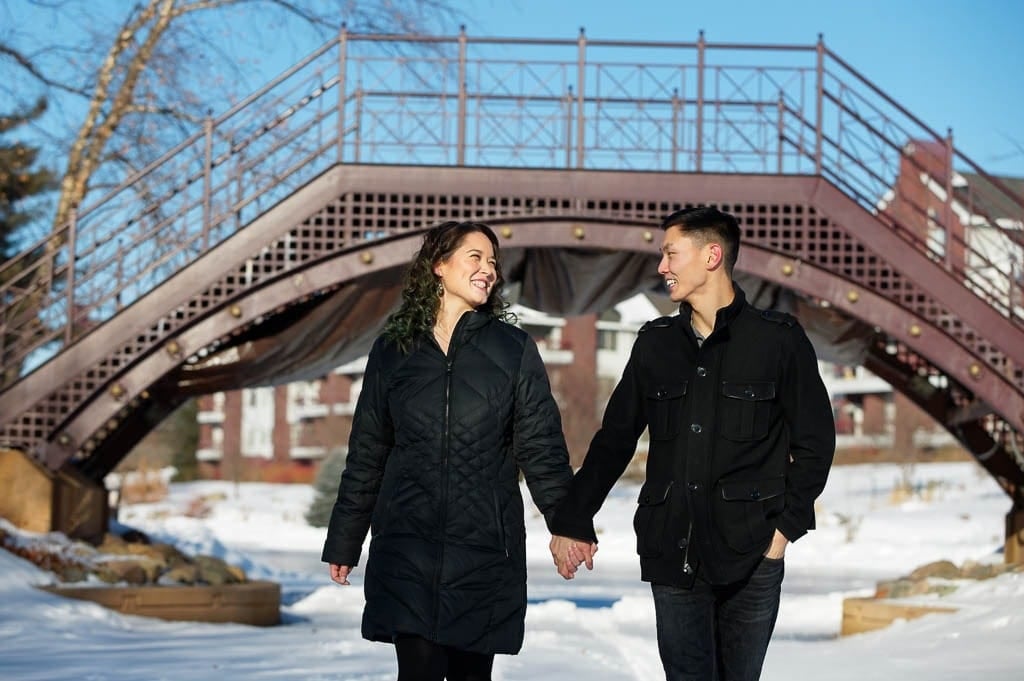 First meeting with this in-loved couple

Like often, the bride was looking for a wedding photographer in Minneapolis to cover her wedding ceremony, far away from Minneapolis and the Twin Cities. She wanted candid shot, but also artistic images, in a timeless style, that will last forever.
After I showed them my wedding album, they started the smile and explain to me their wedding planning.
A few days later, I was about to capture their first couple pictures. 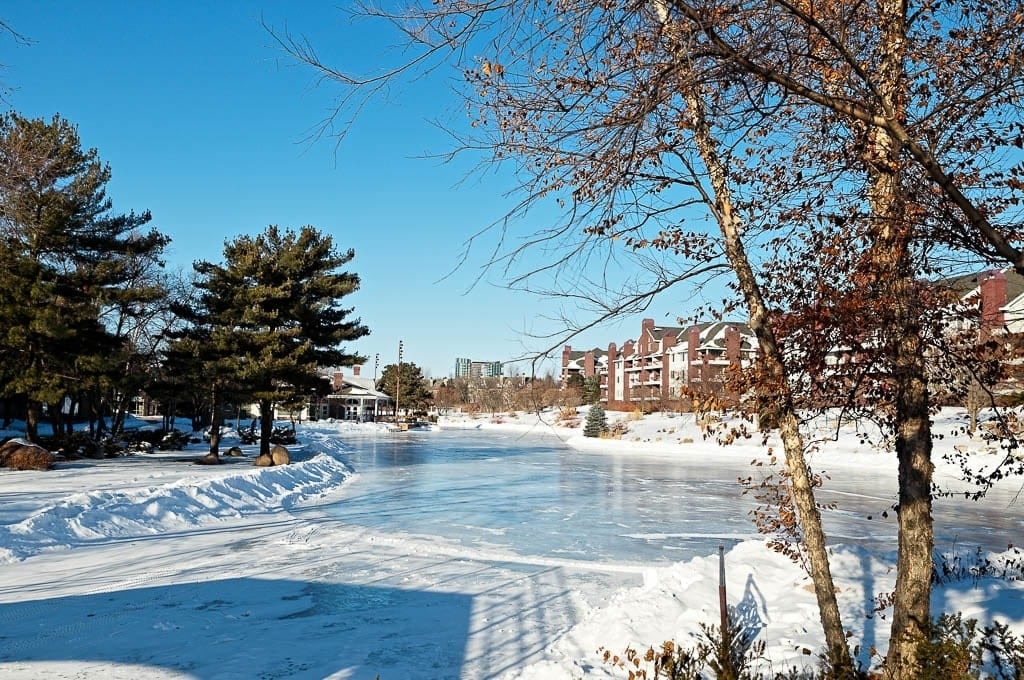 The Centennial lakes for engagement session in winter

During the winter, most couples would decide for an indoor photo session. Instead of enjoying the snow and blue sky, they would probably prefer going to a historic building, a museum or brewery for their session. But not this couple! Even if it was freezing! They decided for an outdoor session. And I was very excited too because colors pop up in the middle of winter snow and provide magical images.
For this first part, we went to a local park in the middle of the suburb area, Continental Lakes. 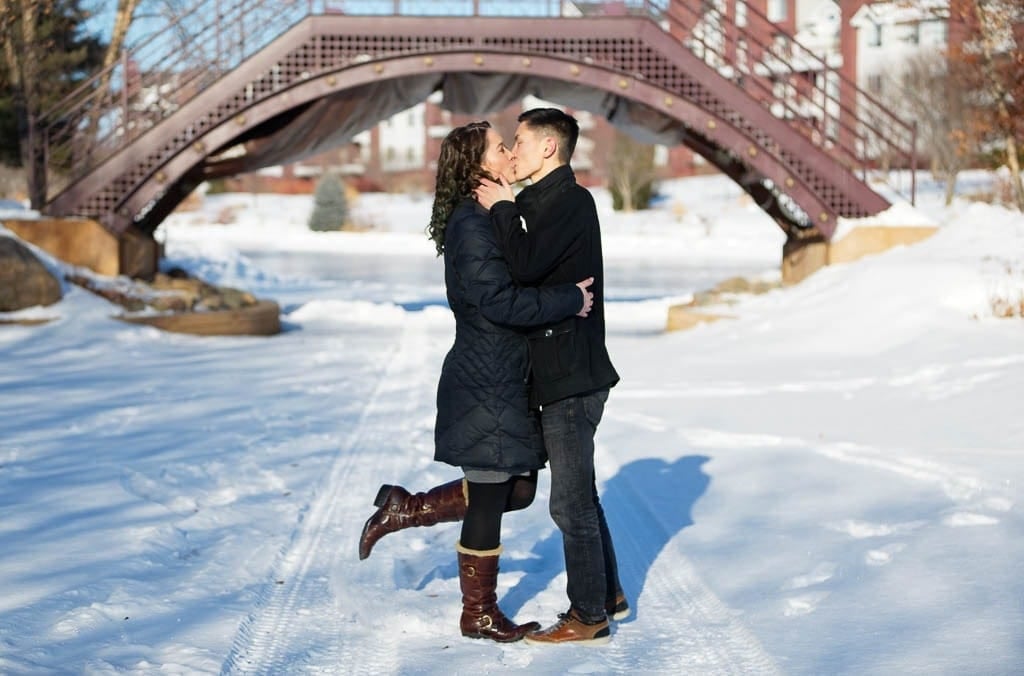 Centennial Lakes is very well located and easy to access, in the center of Edina, on France Ave. Also, most people seeking green places go there. With 10 acres of lakes, it offers a lot of distinct landscape types and also a lot of attractions. It’s a great place to escape the urban city to relax and have fun. 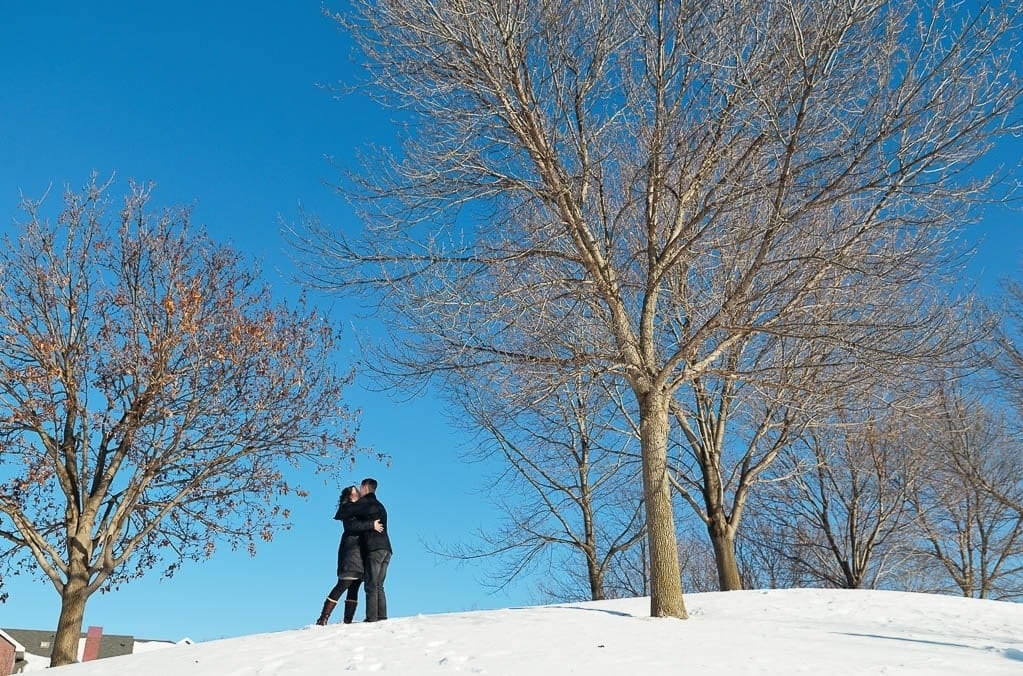 Even if there is no roller coaster yet, the centennial lake is a very active recreation area. There are always some people. During winter, the frozen lake turns into a skating ring which is regularly groomed. Visitors can rent equipment, such as ice-skates, hockey skates, or sleds. Of course you can find a warming house, with everything you could expect to eat or drink.
During summer, you can rent paddleboats and play with electric radio-controlled models. It’s also a place to do family fishing. You can enjoy lawn games, such as croquet and miniature golf. 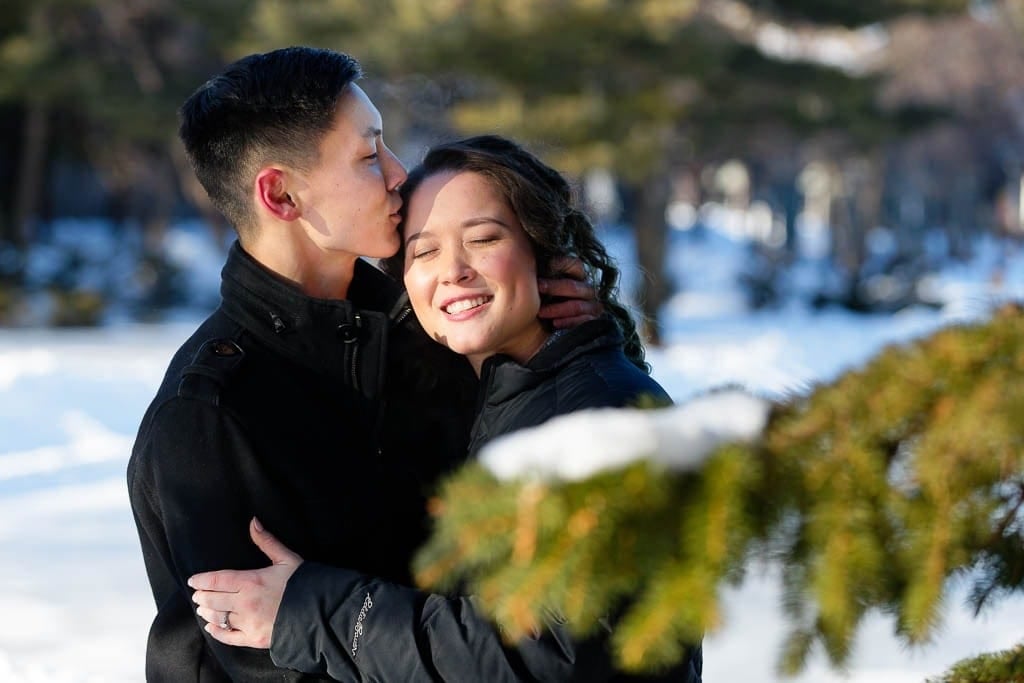 Many Natural and Photogenic Landscape Types

The entire park is covered by promenades, and each corner offers different vegetation. You can find reeds, willow trees, birch trees and plenty of other species. They installed several artistic sculptures on the trails, which give the feeling to be in Alice in Wonderland.
Thus, all the activities mentioned above represent some potential moments you can share with your beloved. It means some great things to do during your engagement session.
The Centennial lakes are a very interesting concept created at the center of the city, and we hope that more urban architects will develop similar spots in the future. Don’t believe I am magnanimous. It’s great for the people living there, but above all it’s great for the photographers. 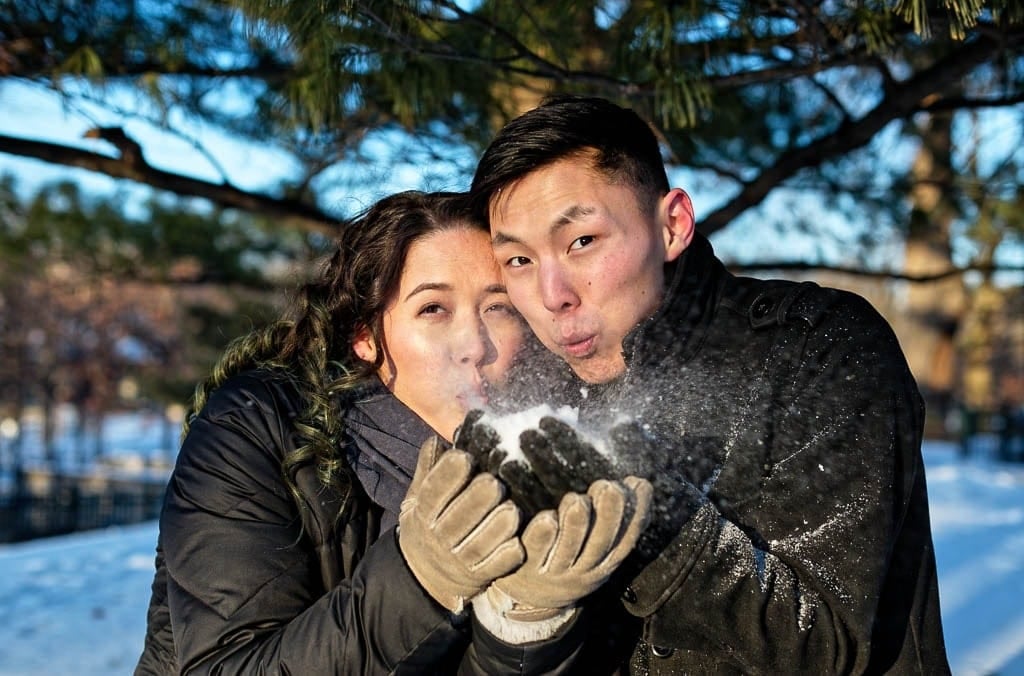 Thinking back to that day, I am not sure if we were just crazy or recklessness. It was one of those Minnesotan days: a pure blue sky with a shinning sun, a lot of wind and some temperatures below minus 10 Fahrenheit.

Considering all the time I’ve been living in Minnesota, I got used to the way Minnesotans dress regarding the weather: they always pretend the temperature is 20°F warmer than it actually is. So as soon as it’s above 32°F you can see on the streets guys wearing only shirts and T-shirts. That’s totally fine with me! Actually, for the engagement pictures are more convenient! Pictures with a thin and relaxed spring jacket are obviously better than pictures wearing a massive sky coat!

During the winter, I usually stay quite warm by being well equipped with several layers of warm clothes. That day, the cold was intense. But then I saw them coming, dressed like you would usually dress for a spring day. I thought that they would beg me to stop the session after 5 minutes. I was wrong. They handled it the entire time without complaining!

I am particularly impressed by the groom-to-be capacity to survive this cold weather, because, as you can observe on the pictures, he forgot his gloves. So while I was complaining of being completely frozen (with my two pairs of gloves), struggling to adjust my camera’s settings, he pretended he was great. What kinds of crazy things we can do for love! 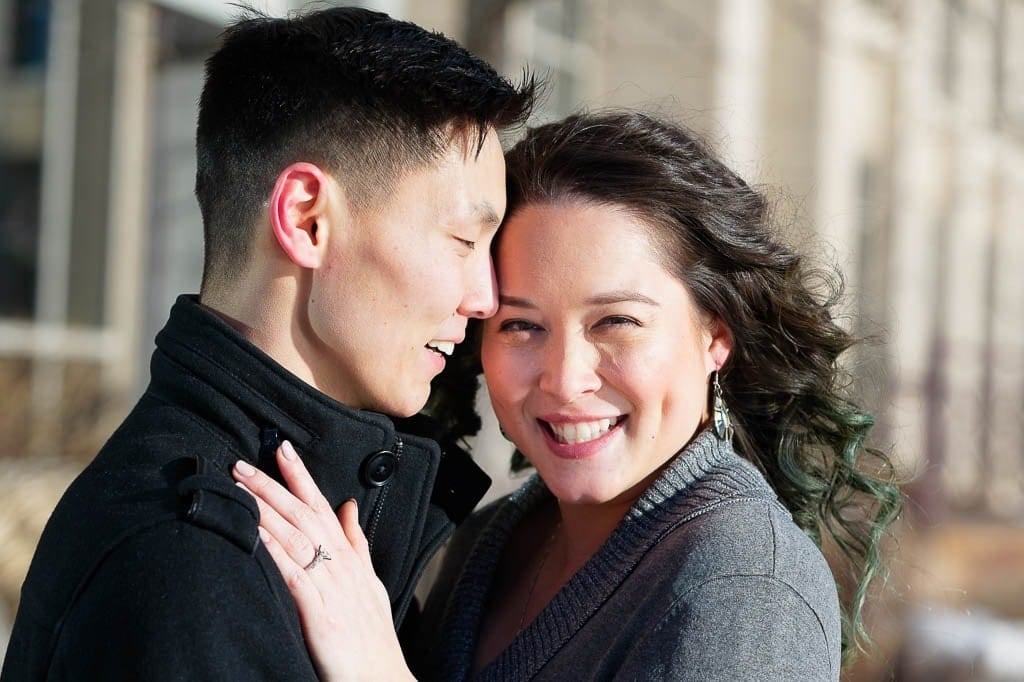 The Photo Session Itself

We started this engagement session by first using the promenade trail, surrounded by birch trees. Then we climbed the nice old fashion looking iron bridge that goes over the pond and gives a scenic view on the park. Darren’s ears were frozen.
I tried to play by adding some plants just in front of the camera lens, at the front stage, in order to stress the sensation of depth in the image.

Then we went for a stroll on the frozen lake. Given there were some fresh indented car tracks in the snow covering the ice, we figured that the ice would support our weight. Thankfully, we were right.
For this image, I included the beautiful bridge in the background and asked the lovers to walk toward me. The complicity between these two lovers created some magnificent portraits.
Then we tried to take advantage of the adjacent hill. They climbed on the top until I could clearly see their entire body standing out of the blue sky.

I also tried to use the pines trees, because I like the beautiful image of the fresh snow on pine branches. They also used a swing in the park. The park offers a lot of formal and informal locations for the couples to seat. 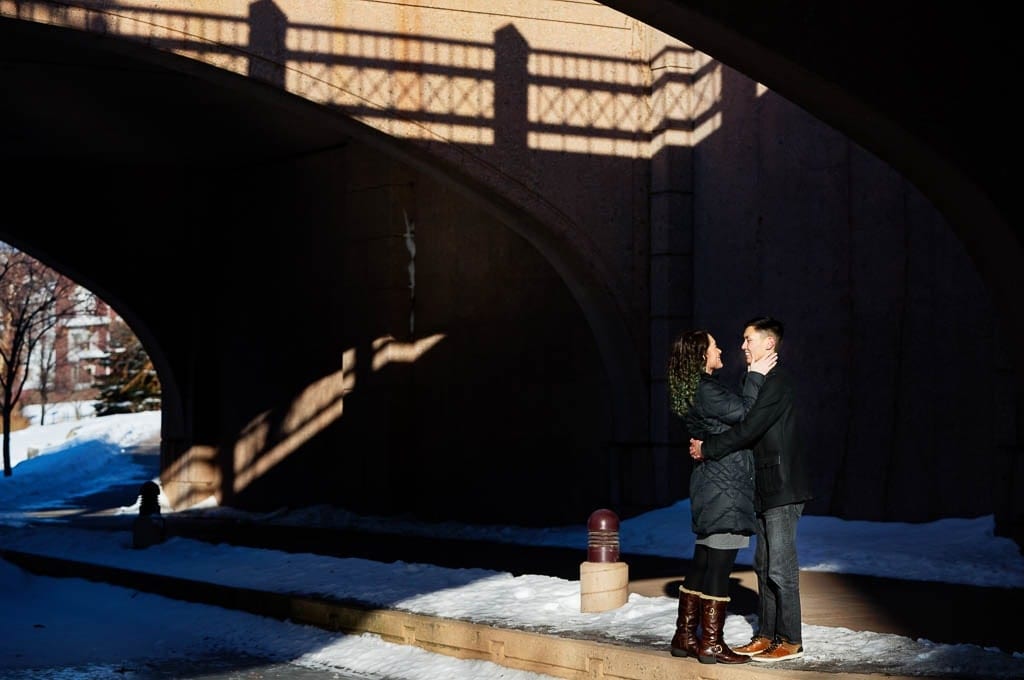 Then, we changed to a more modern style, using the buildings in the background and the reflection of the natural light on the building’s windows.
It was 3:30 p.m. and the sun was already pretty low in the sky. So, instead of struggling to add some extra light in the shadows, I preferred to use the direct sunlight. So I ask them to turn their heads toward the sun. That’s how I created this dramatic portrait of the couple. Check the shoot, the way the sunrays fall on their faces, check how they feel good, how they look in love. That was one of the best dramatic images I have captured on that day.

Of course, I also tried the opposite direction and staged a silhouette picture using the bridge to frame the image.
But after some time we ran out of light, given the sun passed behind the buildings.
Also, we tried a very symbolic (and cheesy) idea to draw a giant heart on the snow covering the icy lake. It was a disaster, but at least it was fun to try. 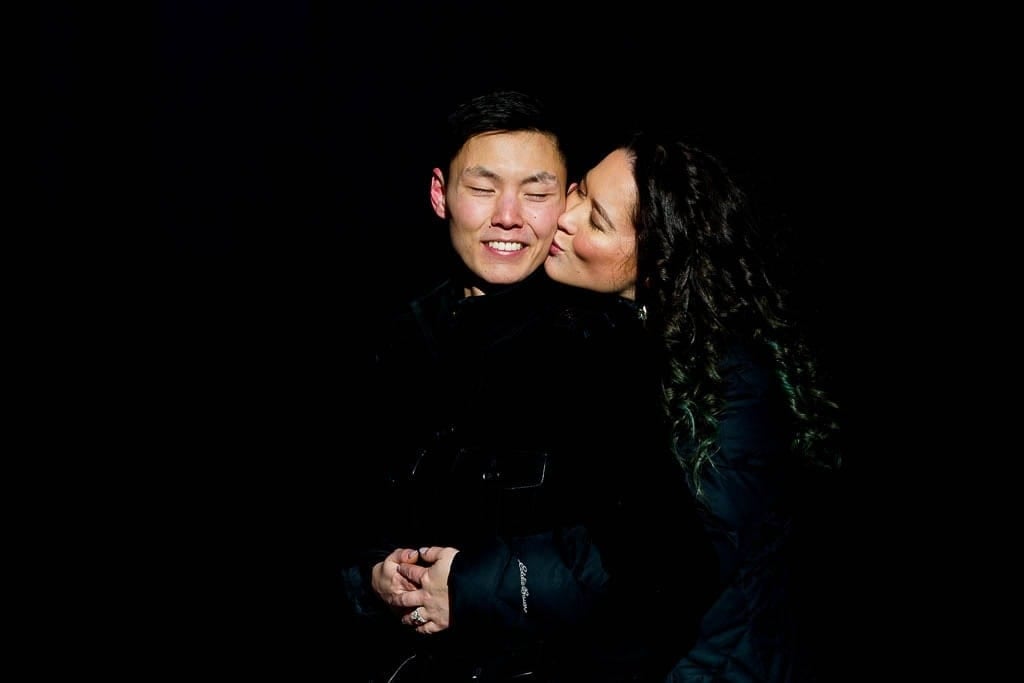 To conclude, it was a great session, although we picked the day of the year that broke all temperature records. For the second part of this session, we left Edina and its Centennial Park and we headed up to the Minnehaha falls. After that, we finished at to the lake Nokomis.
The couple was very brave during the entire time and didn’t complain at all (at least not more than me). Like all pre-wedding sessions, it was an excellent opportunity to know them before their wedding day. 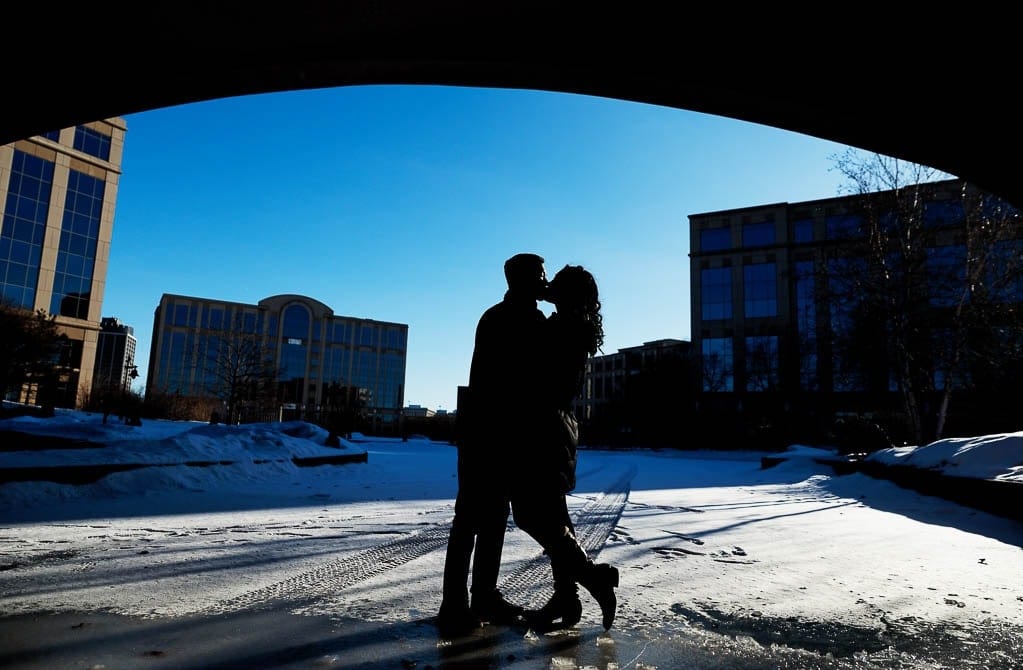 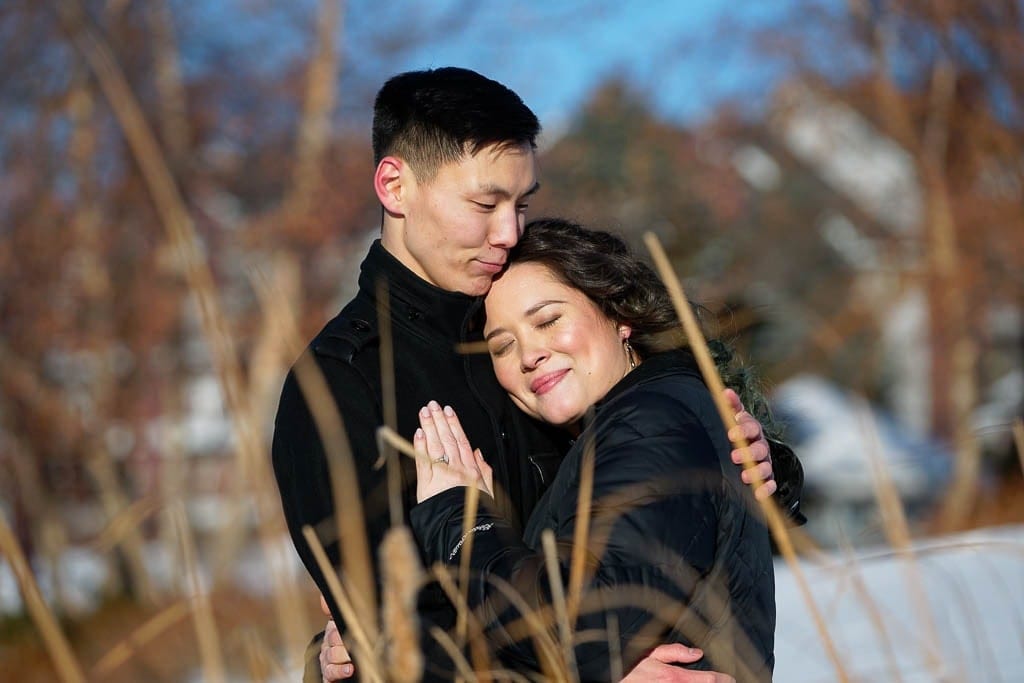 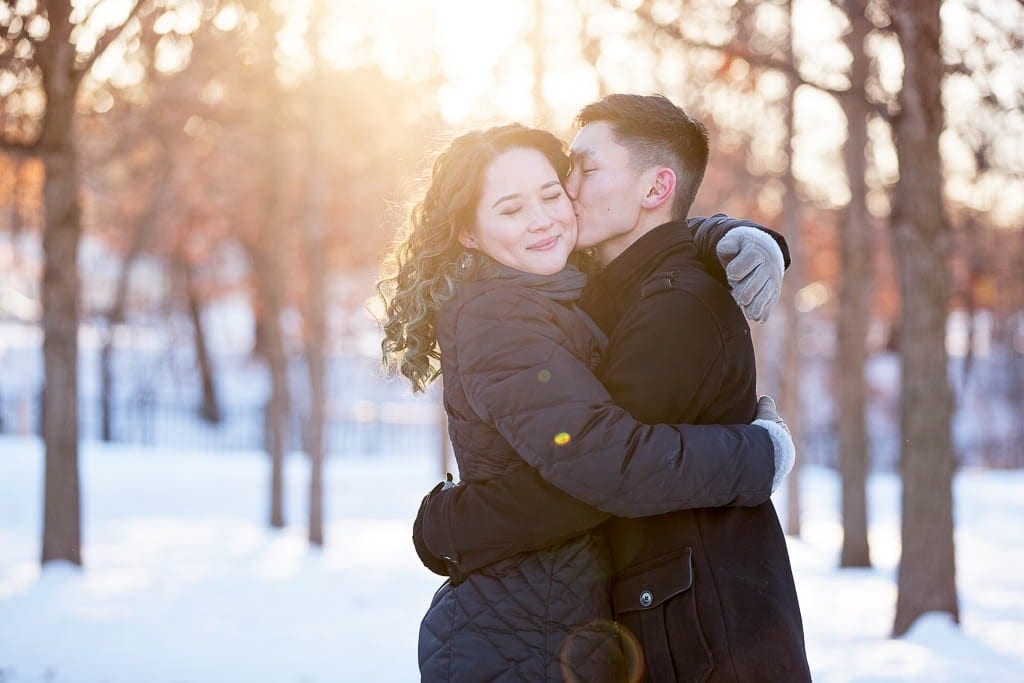 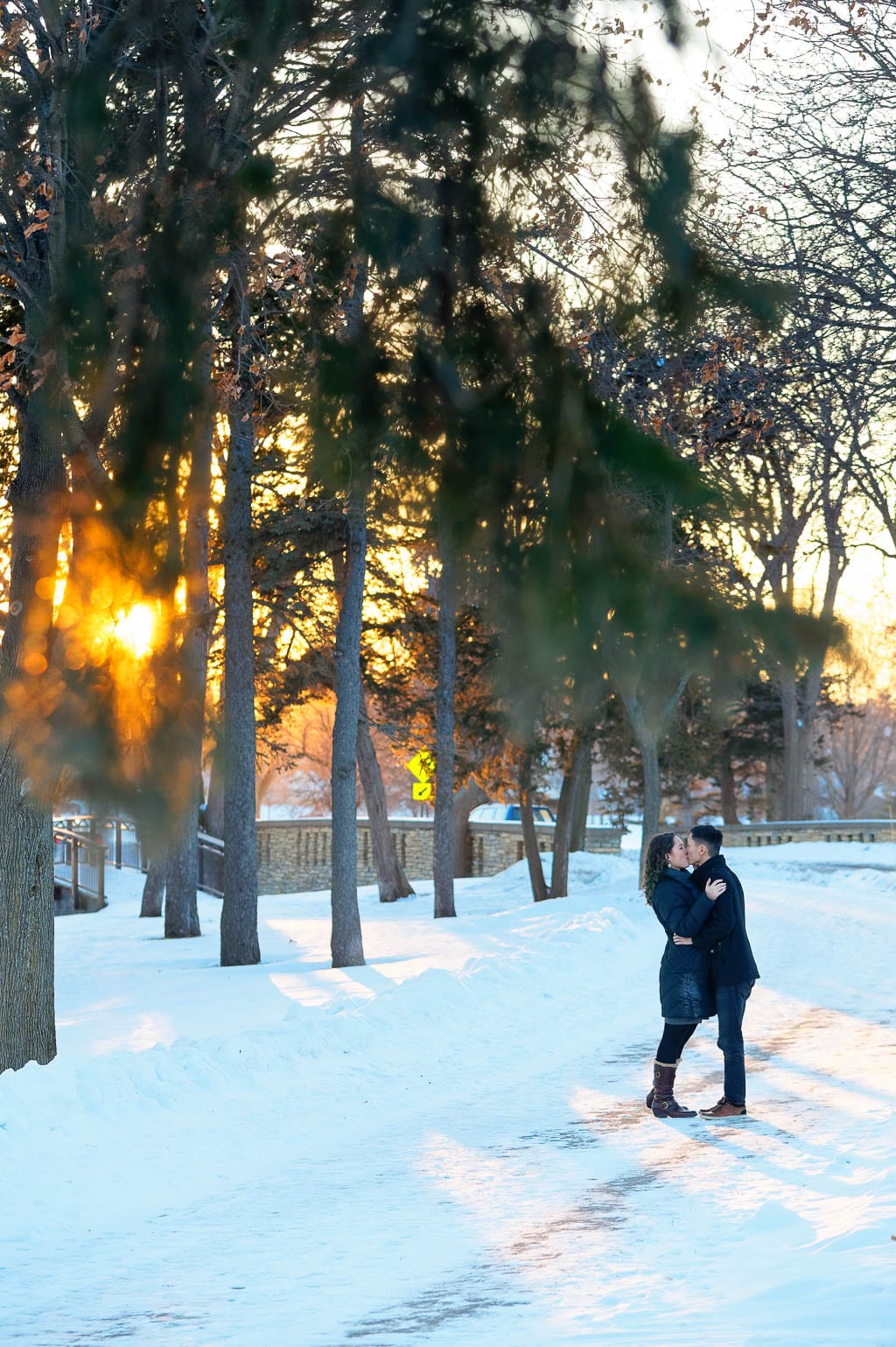 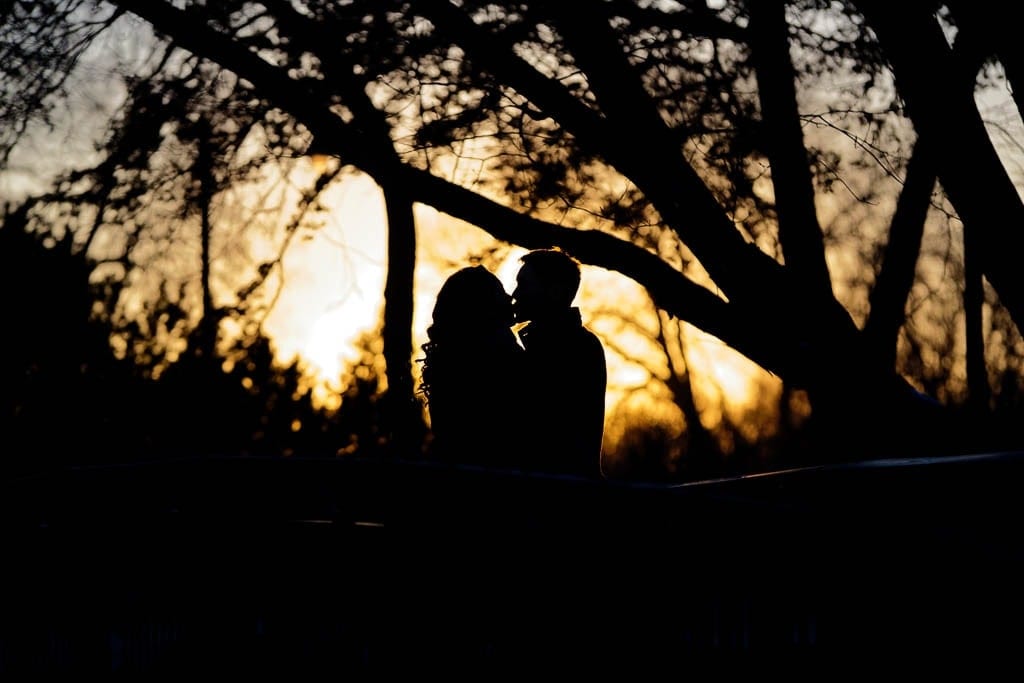 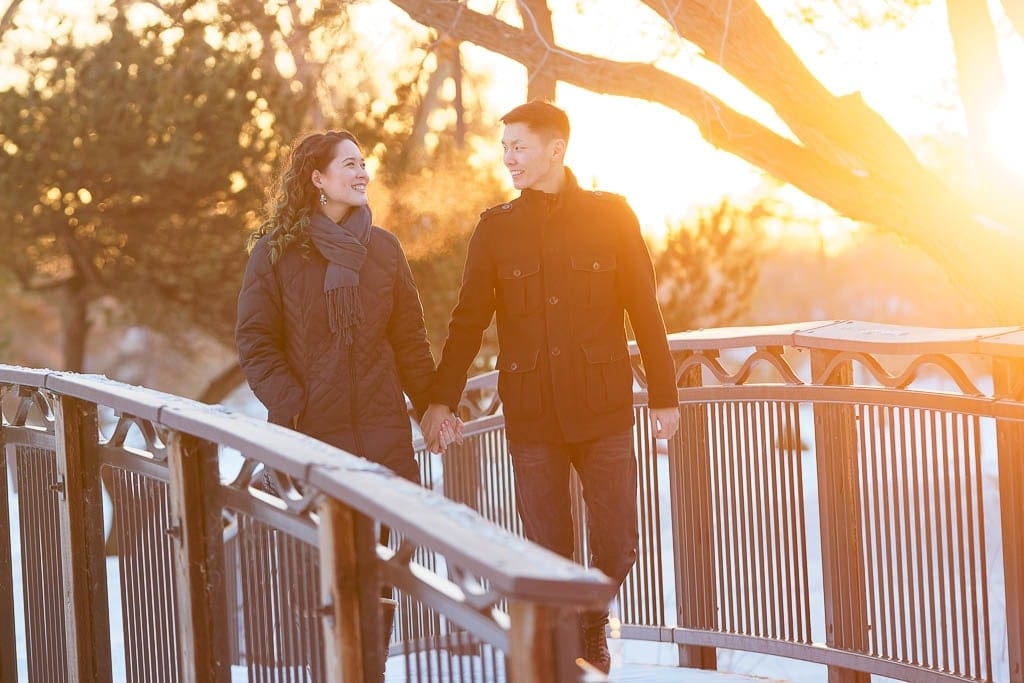 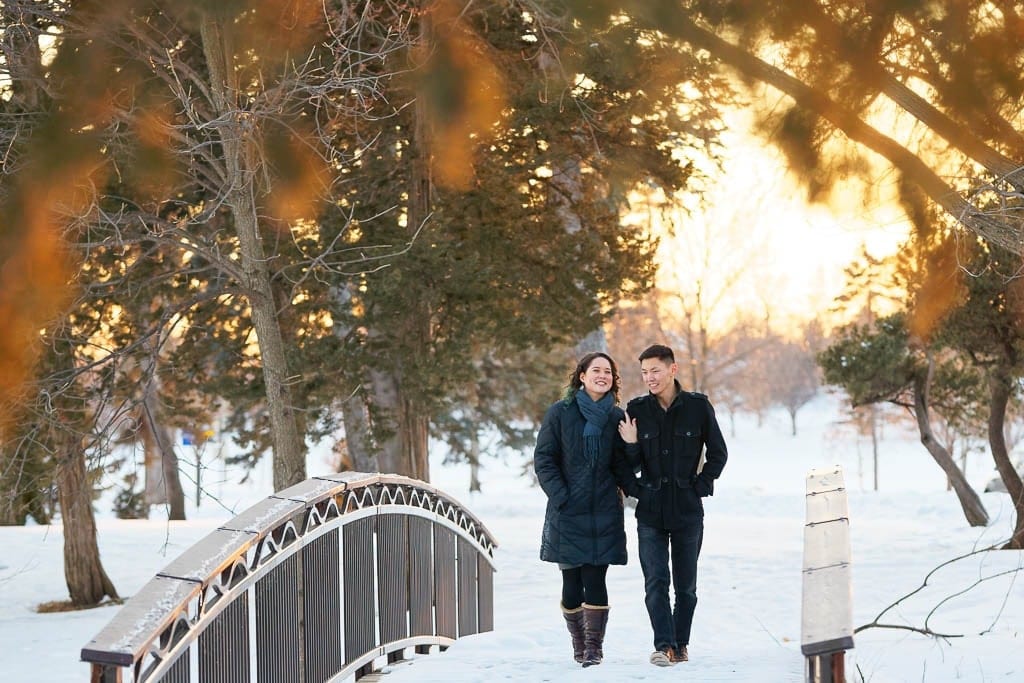 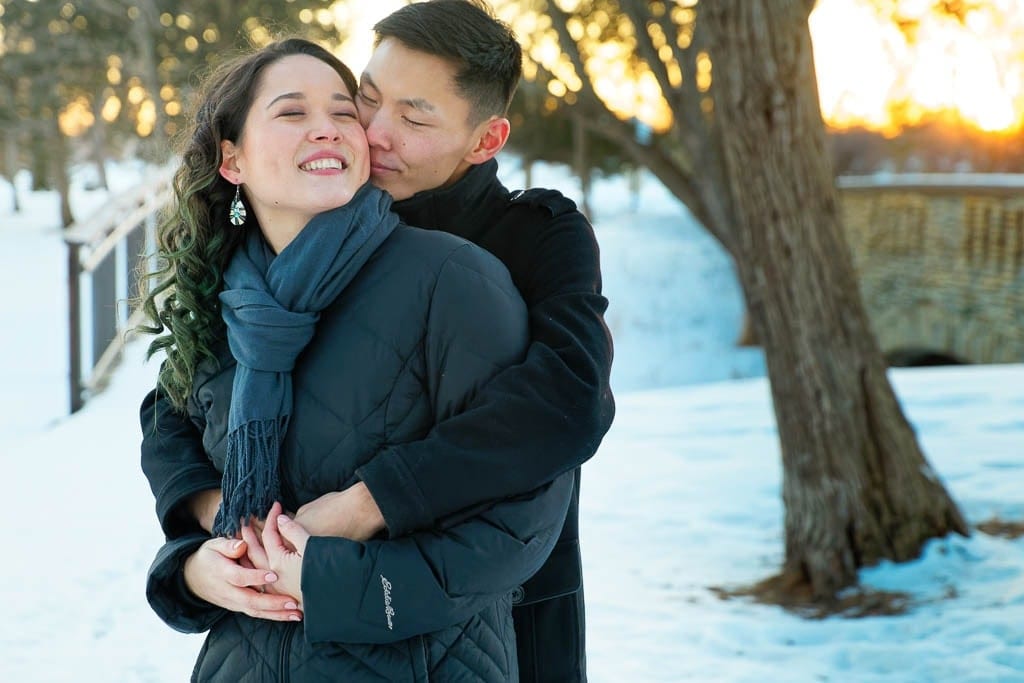 Other famous Locations for engagement sessions or your proposal

If you like E&D engagement session but are looking for more variety of option, here is a short list of renewed locations where it’s not rare to witness a man proposing his wife to marry.

The Minnesota Landscape Arboretum (Chaska, MN) is beloved by the husband, wife who lot nature. It’s a very large park located in the south of the Metro area. It’s managed by the UMN, and feature thousands of different plants and flowers. It has a Japanese garden, a rock garden with pines and falls, and all kinds of landscape for all tastes.

Nicollet Island is in a vogue park for weddings in MN located to the west of Minneapolis and loved by wedding vendors. It features not only a direct view on the Mississippi and the City buildings but also a post-industrial venue called the Nicollet Pavilion.

If couples are ready to walk the Saint Anthony Theater, on Main Street, offer a nice front end for photography. So are the Aster cafe and other wedding venues.

Adored by St Paul Resident, the Lake Como and the Como Park are not only the favorite place of a variety of photographers but also the perfect location to have fun for families. Everyone should find happiness between the Lake Como, the zoo, the conservatory, the attraction park (in the Zoo), the Carrousel, and several acres of the park itself.
You might be interested to know that this park also offers wedding venues services in partnership with good vendors.
Be careful thought in summer, the park can be full of families having fun. 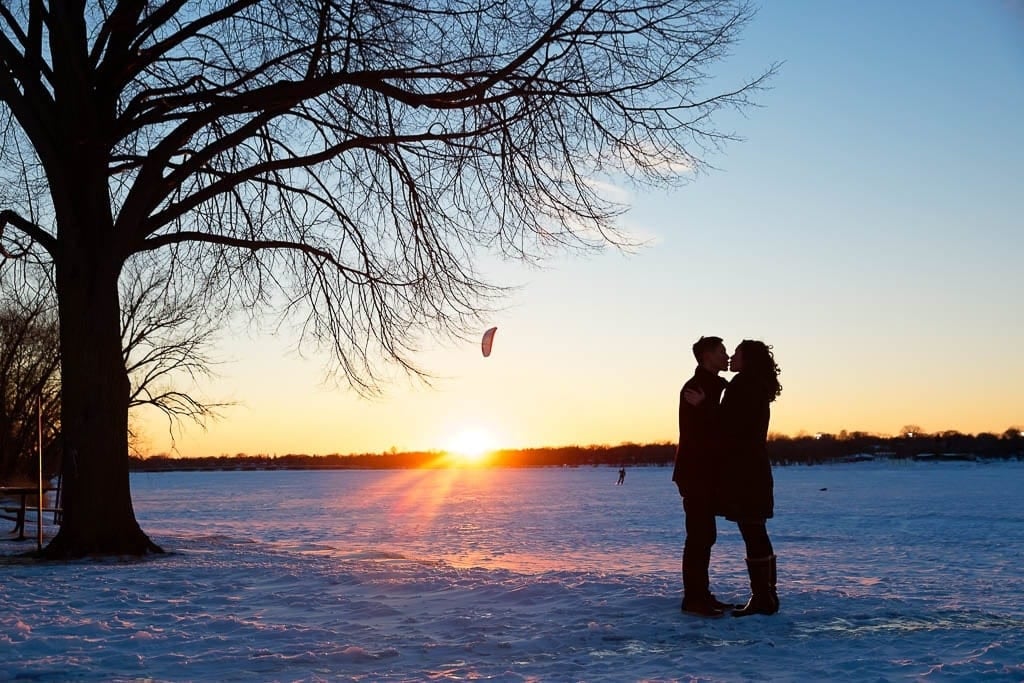